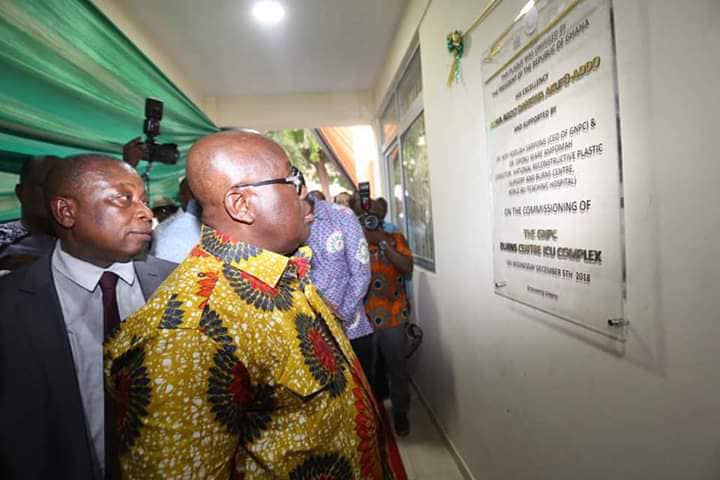 President Akufo Addo has donated his November salary of 25,000.00 cedis to the Korlenu Reconstructive Plastic Surgery Fund as part of his contribution to resourcing the Fund to assist Ghanaians who may require plastic surgery.

The President made the donation when he commissioned the National Reconstructive Plastic Surgery and Burns Centre of the Korle Bu Teaching Hospital as part of activities of day two of his three-day working tour of the Greater Accra Region.

“I have been asked by the Deputy Chief of Staff in my office to contribute my month salary of twenty five thousand cedis (25,000.00), November salary, to the Burns and Reconstructive Surgery Fund,” the President said.

STATE OF THE MATERNITY BLOCK AND SURGICAL WARD

The state of the Maternity Block and Surgical Ward of the Korle Bu Teaching Hospital according to President Akufo Addo as he saw it when he entered the hospital “breaks his heart.”

“I saw in it the sign of a drastic decay that has engulfed our country,” the President said.

He however said he has been informed by the Minister for Health that funds have been sourced for the total rehabilitation of the two buildings. The terms of the funding he says are before the Finance Minister and he will certainly give it all the approval it needs when it comes before cabinet in order for the rehabilitation works to start as quickly as possible.

The Minister for Health, Kwaku Agyeman-Manu, in his address said currently, only three of the ten regions have reconstructive surgery presence. He assured that all efforts are being made by his Ministry to establish additional reconstructive surgery presence in the remaining seven regions of the country. He urged managers of the new facility to adopt proper and adequate maintenance structures to keep the centre clean at all times. The Health Minister registered sincere thanks to the Ghana National Petroleum Corporation (GNPC) for coming on board to help complete the project.