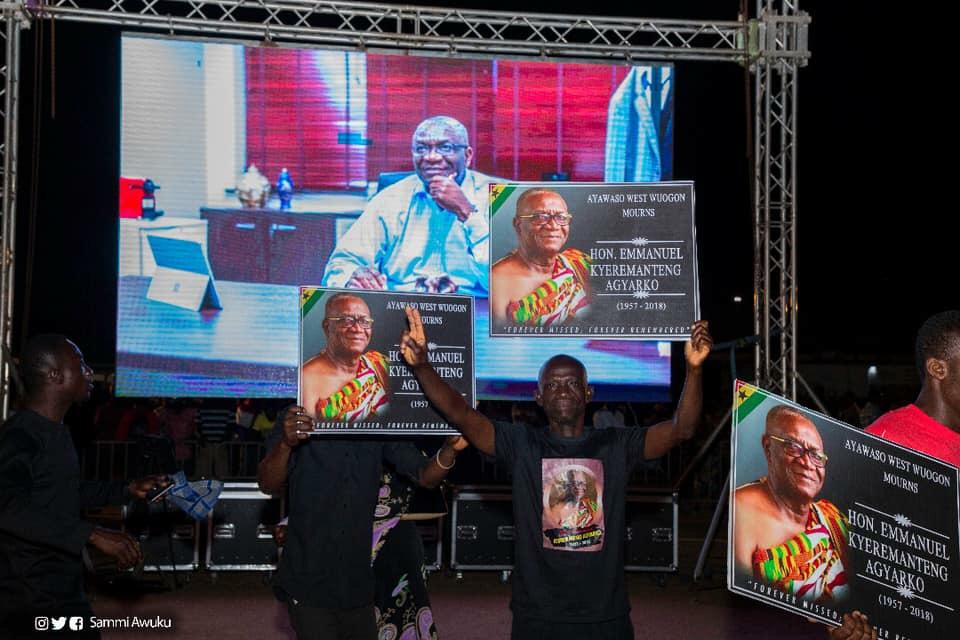 The funeral of the late Member of Parliament for the Ayawaso West Wuogon Constituency, Emmanuel Kyeremanteng Agyarko is currently underway in his hometown of Krobo Odumase in the Eastern Region.

The entire ruling New Patriotic Party and government machinery has pitched camp in Odumase to give the fallen MP a befitting burial.

President Nana Addo Dankwa Akufo-Addo, NPP National Chairman Freddie Blay, Ministers of state, National party officers, Members of Parliament from both sides, religious and traditional leaders and people from all walks of life are expected to converge for the funeral.

The mortal remains of the late MP arrived in his hometown yesterday, Friday January 25, 2019.

Before the remains arrived in Odumase Krobo, the Speaker of Parliament, the Rt. Hon. Aaron Mike Oquaye and Members of Parliament received at it 2pm at the forecourt of parliament yesterday to allow his colleague MPs pay their last respects.

It was then moved to the NPP National Headquarters at 2:30pm where party executives, officials and members also paid their last respects to the affable late MP.

‘’From the party Headquarters, we will drive to the NPP Greater Accra regional party office which he, the late MP donated to the party so that the regional party officers will also bade him fare well. By 3pm, we will move the mortal remains to the constituency office in Ayawaso West Wuogon, in Dzorwulu to enable constituency officers also pay their last respects. And then we will drive the remains through Abelemkpe through Tetteh Quarshie , through Okponglo to Bawaleshie and then American House after which he will finally be driven to Odumase Krobo for the funeral proper’’ National Organiser of the NPP Mr. Sammi Awuku said on Accra based okay Fm yesterday.

Mr. Awuku opined further that ‘’today is a very difficult day for the party and tomorrow is even going to be more difficult for us as a party, but the covenant keeping God will keep His covenant with us’’.

Mr. Awuku extended the party’s invitation to the generality of the Ghanaian people to mourn with them in these trying moments, in order to give the late MP a befitting burial.

The late Emmanuel Kyeremanteng Agyarko, passed on a few weeks ago in America where he was receiving treatment for an ailment in a health facility.

His funeral has been slated for yesterday, Friday, January 25, 2019 and today, Saturday January 26, 2019 at Krobo Odumase in the Eastern Region.