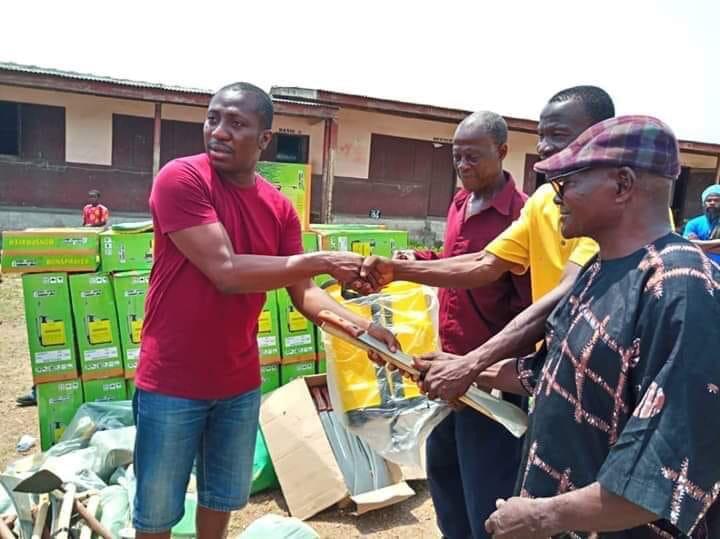 The Member of Parliament for the Efutu Constituency in the Central Region, Alexander Afenyo Markin has supported famers in the constituency to cultivate more, under government’s planting for food and jobs programme.

Yesterday 3rd March 2019, farmers at Sankor a suburb  of Winneba, received support items including spraying machines, wallington boots, cutlasses, hoes and water cans among others from the MP who is also a lawyer and a Businessman.

Mr. Afenyo Markin also donated an amount of ten thousand Ghana Cedis to a group called Variety Farmers Association to aid them in their activities.

The farmers expressed gratitude to the MP and explained it was the first time they had received such great amount of support since they ventured into farming, adding that government’s planting for food and jobs initiative was one that has greatly impacted them.

The farmers also ceased the opportunity to call on government to extend the one village one dam initiative to the Efutu area to enable them benefit from it.

Mr. Afenyo Markin in a brief speech extolled the farmers to put the donated farming inputs to good use in order to support and propel the planting for food and jobs initiative so that its impact would be felt in the Efutu constituency.

The MP at another event in the constituency donated 34 brand new sewing machines to graduating apprentices who just completed their training in dress making.

Meanwhile on Thursday 28th February, 2019, Mr. Afenyo Markin cut the sod for the construction of a library, toilet and community center, each for the benefit of the people of Osobompanyin and Atekyedo.