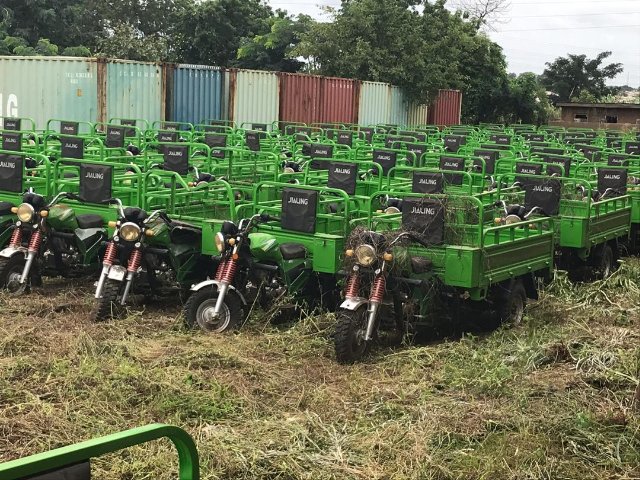 A militia group aligned to the governing New Patriotic Party (NPP), Kandahar Boys, allegedly forced its way into the Northern Development Authority premises and took away 400 tricycles without approval.

According to information gathered by JoyNews, 10 containers holding 40 tricycles each and were moved from the NDA premises sometime in October 2019, have

Northern Regional Correspondent, Illiasu Tanko, reported Tuesday, that the containers were spotted at a location shared by a Non-Governmental Organisation (NGO), Centre for Active Learning and Integrated Development (CALID) as well an electrical company.

“As we speak right now 10 containers are still here…some of them open and actually empty and there are no contents for us to see. These containers have been seen here since news broke that the 400 tricycles were missing,” the reporter told News Anchor Emefa Apawu, on Newsnite on Joy FM.

Corroborating the report, Executive Director for CALID, Mohammed Awal Bapio, said he saw the containers there on October 26, 2019, but when he asked the landlord, Yahuza Idrisu, who rented part of the space in the property to the group, “he told me yes they called him and said they were bringing some items there.”

“I know that 10 containers are seated here but as to how many tricycles I don’t know,” Mr. Babio stated.

He added that his accountant asked one of the individuals who transported the containers to the premises to disclose the content of the container.

It was at that point they got to know that the containers were holding some tricycles, he added.

The sudden disappearance of the containers which were being kept at the NDA yard in Tamale led to the dismissal of the acting Chief Executive Officer, Dr Alhaji Abdel-Majeed Haroun.

He then reported the matter to the Police Command in the Region to help locate and retrieve the missing tricycles.

Northern Regional Minister, Salifu Saeed, was accused of having knowledge of the whereabouts of the tricycles an allegation, he has since denied.