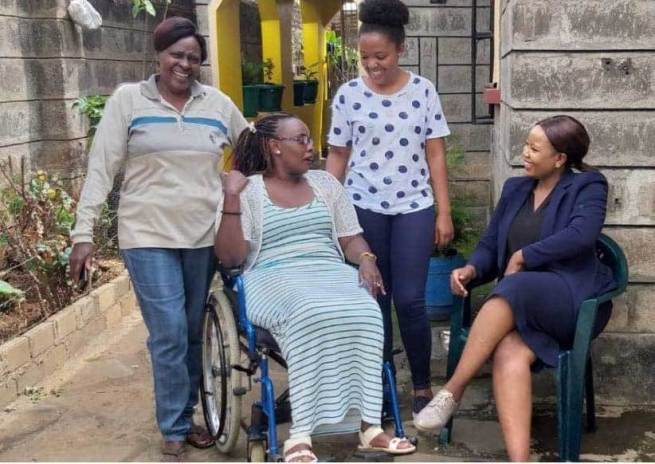 A Kenyan woman has shared a rather sad and unfortunate story after herself after surviving a ghastly accident which left her wheelchair-bound.

The 33-year-old woman identified as Georgina Wambui got married to herself in a simple ceremony in order to live a happy life.

According to Georgina Wambui, she was in a relationship before the accident but decided to end it because they had issues.

She explained that after the accident in 2014, she lost most of her friends and close relatives since she is now confined to a wheelchair.

She added that after revealing to her family about her decision to marry herself they found it absurd and decided to change her mind but it fell on deaf ears.

So on her 33rd birthday, she bought herself a ring, a beautiful gown, a cake with the inscription “Gee Weds Gee” with her bridesmaid and got married to herself in a colourful ceremony.

“After the accident, I lost my friends who were close to me. That changed me a lot, it gave me a lot of strength. It made me realise some people are there to stay and others are not. This is one reason why I choose very few people around myself.

You may choose to wait but will you wait for the rest of your life. I really wanted to be married to a man but it has taken longer than what I expected, that is why I decided I will go ahead and marry myself. After my wedding, the next thing is getting a child, that is where I’m heading now,”  Georgina stated.

Georgina further revealed that now the next plan she is working on is getting a child but wouldn’t mind if she finds a caring and genuine man who will give her children or a deadbeat dad.

The Kenyan-woman is hopeful that she will surely have children and all that matters now is her happiness.