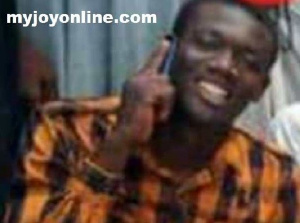 Driver’s mate, Wahab Sabaani, was attacked by a mob following shouts of ‘arm robber’ at the stranger by chief of the town, Nana Kusi Baabu II in broad daylight.

Family spokesperson, Mohammed Mumuni Zakari, says the body will not be buried until they get justice for their deceased relative.

Amoam Achiase was recently in the news when two kidnapped Canadian nationals were rescued by security operatives.

This time round, it’s for the killing and burning of a driver’s mate who is also a member of the Bawku Youth Association by residents.

On the 20th of this month, Sabaani, believed to have suffered mental disability due to a high fever attack left his Asawasi family house unnoticed.

He trekked along a familiar route he had been plying, as driver apprentice, found himself at Amoam Achiase Palace , about 30 kilometres from home.

The crowd lynched him, put a lorry tyre around his neck and set Sabaani’s body on fire at about 2 p.m.

Police at Ejisu later retrieved the largely burnt body and deposited it at the Juaben Hospital morgue.

” The youth is calling on all the stakeholders and government to come in so that our brother will get justice because this killing is unacceptable. Sabaani was caught with empty handed. They didn’t see Saabani picking something and they arrested him. Sabaani as a brother has high fever that attacks him time to time and we are very sure what happened that day it was the high fever that attack him that led him to the chief’s house.”

Police have since arrested Nana Baabu and an alleged accomplice, Akwasi Adu, who were arraigned and remanded in police custody by the Ejisu Magistrate Court to reappear on the 10th July, 2019.

Shaabani’s relatives want police to widen scope of investigation in order to find all those involved in the criminal act.