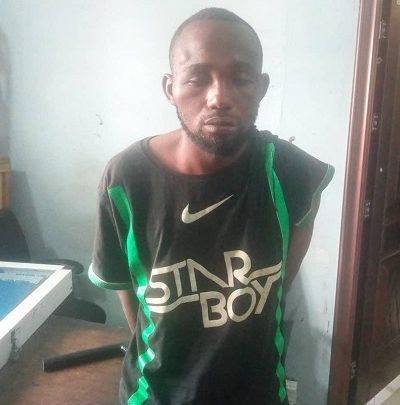 A 24 old Nigerian is in the grips of the law for allegedly robbing and kidnapping a businesswoman at Mile ‘7’ in Accra on Tuesday, April 2, 2019.

The suspect, Isaac Aigbona and another accomplice, who is on the run, and being sought by the police, allegedly kidnapped the businesswoman and took her to the bush at Amasaman in her vehicle.

He said on April 1, at about 9:30pm, two Nigerians attacked and robbed the victim of her valuables, and took the woman hostage in her vehicle, and took her to Amasaman.

“In the process the suspects hit a neighbour, who was in the house with a rod, which resulted in blood oozing from his nose and he becoming unconscious,” DCOP Boadu-Peprah indicated.

He said the suspects asked the businesswoman to take them to her husband so that they could collect money from him, else they would kill her.

DCOP Boadu-Peprah said unfortunately for the robbers, a police patrol team approached the area, and they asked them why the car was parked in the bush, and they (robbers) said the vehicle was faulty.

He said the businesswoman raised the alarm, which alerted the police, who arrested one of the suspects, but the other escaped.

DCOP Boadu-Peprah said the police have retrieved all the items the robbers seized from the businesswoman and called on the public to provide information for the arrest of the accomplice.