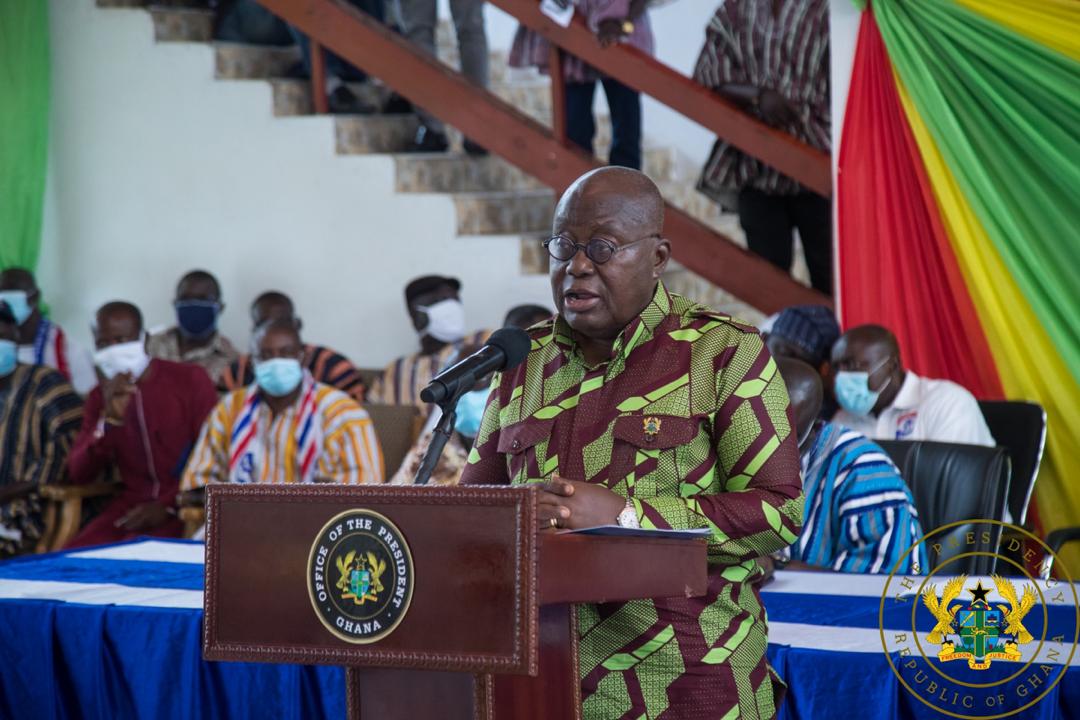 The President of the Republic, Nana Addo Dankwa Akufo-Addo, says his Government, since 7th January 2017, has embarked on the execution of 2,163 projects in the Upper West Region.

According to the President, “there are 2,163 projects being executed in the Region, with 1,299 completed, and the remaining 864 ongoing. Out of the 1,299 completed projects, 112 are in the educational sector, 48 in the health sector, 31 in the roads sector, and 256 in the water and sanitation sector”.

Of the 864 ongoing projects comprise, amongst others, he stated that there are “51 in the educational sector, 17 in the health sector, 18 in the roads sector, and 684 in the water and sanitation sector. With four more for Nana and the NPP, we will do even more for you”.

President Akufo-Addo made this known on Friday, 9th October 2020, when he addressed Members of the Upper West Regional House of Chiefs, on day 1 of his 2-day working visit to the Region.

“They are Daffiama/Bussie/Issa, Wa East, Lambussie/Karni, Sissala West and Wa West districts. The hospitals will have a 100-bed capacity, fully equipped, with appropriate accommodation for medical personnel, i.e. doctors and staff,” he added.

Wa Waste Treatment Plant
Later in the day, President Akufo-Addo cut the sod for the construction of a solid waste treatment facility at Wa, in the Upper West Region.

The Plant, which is being established by the Jospong Group and its partners, in collaboration with government, and which is estimated to cost some fifteen million euros (€15 million).
The construction of this plant is in line with the Akufo-Addo Government’s policy of creating an enabling environment for the private sector to partner government to bridge the infrastructure gap in sanitation.

Upon completion, the plant will receive, sort, and process two hundred tonnes of solid waste within the Upper East Region.

The President noted that benefits to be accrued from the project include the effective and efficient management of municipal solid waste, the production of organic compost for horticultural and agronomical purposes, reduction in the high rate of plastic pollution, and the processing of recyclable fractions of the total waste such as paper, plastic and metal for reuse.

“Equally more important will be the provision of jobs for the youth of this community and its environs, which will help improve the local economy,” he said.