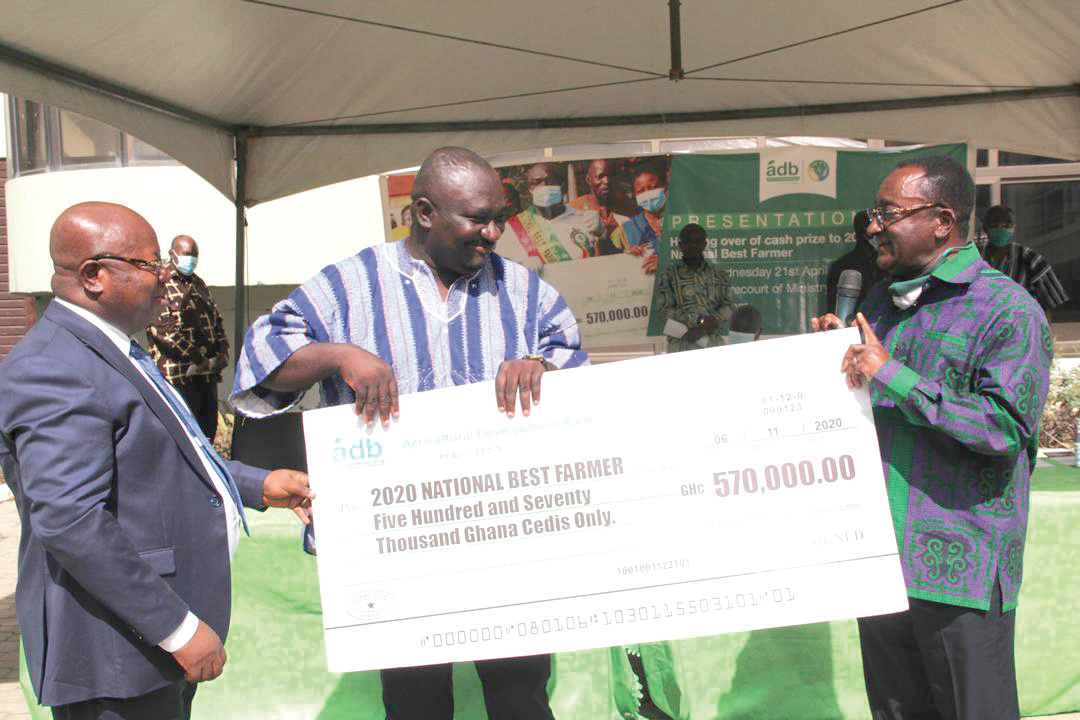 Mr Kusi was presented the amount at a short ceremony in Accra during which the Minister of Food and Agriculture, Dr Owusu Afriyie Akoto, commended farmers for their tireless efforts to provide food and raw materials for households and factories.

The 55-year old best farmer was presented a dummy cheque by Dr Akoto and the Managing Director of the ADB, Dr John Kofi Mensah.

The minister also commended ADB for its continuous commitment to farmers, agribusinesses and the agricultural sector in general.

He said the bank had showed resolute commitment to the welfare of farmers through financial and technical support and that had helped to improve the fortunes of the sector.

Dr Akoto thanked the 2020 National Best Farmer for the efforts and charged him to utilise the prize money to improve upon his business.

The MD of ADB assured the public that the bank would remain the lead sponsor of the award as part of its resolve to support the government in rewarding farmers and fishers.

Dr Mensah said Mr Kusi had presented an agribusiness proposal on the utilisation of the funds to the bank through the Ministry of Food and Agriculture.

He said after scrutiny by the bank’s Agribusiness Division, ADB was satisfied, hence the decision to present the cash prize.

“The document indicated that part of the money would be used to acquire and install a cocoa drying house, expand most of his existing farms and employ more people. In addition, there will be construction of three boreholes, upgrade of his agricultural mechanisation centre and adoption of improved agricultural methods, improved propagation materials, fertilisers and animal feed, among others,” he said.

The MD said the projects outlined in the proposal were “critical for the expansion of his business” and the bank would provide Mr Kusi with a dedicated relationship manager to assist in ensuring the proper utilisation of the funds.

“Our expectation is that by upgrading and expanding the mechanisation centre, more farmers in his catchment area would benefit from mechanisation services,” he said.

He said ADB remained committed to collaborating with MOFA to ensure that the agricultural sector continued to play its critical role in national economic growth.

Consequently, he said, the bank had focused some attention in funding out-grower schemes for the government district industrialisation programme, the one-district, one-factory (IDIF) projects.

He expressed the hope that the initiative would ensure job creation, sustainability and improved standard of living for the populace.

“ADB remains as a major partner to all agricultural related programmes and projects of government, specifically Planting For Food and Jobs, Rearing For Food and Jobs, Planting For Export and Rural Development and the agricultural component of one-district, one-factory initiative. We have initiated the process for similar projects in the Eastern and Greater Accra regions, with our technical team evaluating applications from poultry farmers in these regions.”

“We wish to reiterate our unflinching commitment to support all initiatives aimed at guaranteeing food sufficiency and ensuring that the agricultural sector remain the backbone of our economy,” he added.

The 2020 National Best Farmer also expressed excitement about the fulfilment of the promise and pledged to put the funds to productive use.

He said the funds had come at the right time as they would help to expand his business and strengthen its capacity to employ and produce more.

A livestock and multi-crop farmer from the Jomoro District in the Western Region, Mr Kusi beat off competition from his colleague farmers across the country to emerge the 2020 National Best Farmer.

He was given the honour at the 36th edition of the National Farmers Day held in Techiman in the Bono Region.

A father of nine, Mr Kusi quit his job as taxi driver around 2012 to take to full time farming.

He said on the day of the award that he saw the honour as a reward for his 10-year service to the nation through farming.