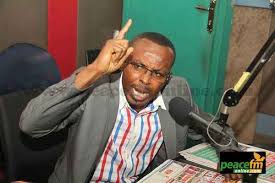 The Central Regional Minister, Kwamena Duncan has said the ruling New Patriotic Party (NPP) Member of Parliament for the Assin Central Constituency in the Central Region, Kennedy Ohene Agyapong has the penchant for threatening party leaders in the media for contracts.

‘’Mr. Kennedy Agyapong started these allegations when Prof. Kenneth Agyemang Attafuah (The Ag. Executive Secretary of the National Identification Authority) had refused him a contract worth $293million concerning the National Identification Card’’ he said in a statement denying allegations leveled against him by Mr. Agyapong that he has awarded 50 road contracts to himself.

According Mr. Duncan, Mr. Agyapong having lost the NIA contract never lost focus and worked until his wife was awarded a 100 Million Ghana Cedi contract.

‘’Mr. Kennedy Agyapong did not lose focus on this NIA contract until he and his wife Stella Wilson, were awarded Ghc 100million contract by the then energy Minister, Mr. Boakye Agyarko to supply 150Watts LED street lights’’ he added.

He also described as totally false, the accusation by Mr. Agyapong saying ‘’ I wish to categorically state that since I took over as a regional Minister, the region has not received a road contract more than 30 which he Mr. Kennedy Agyapong is a living testimony’’.