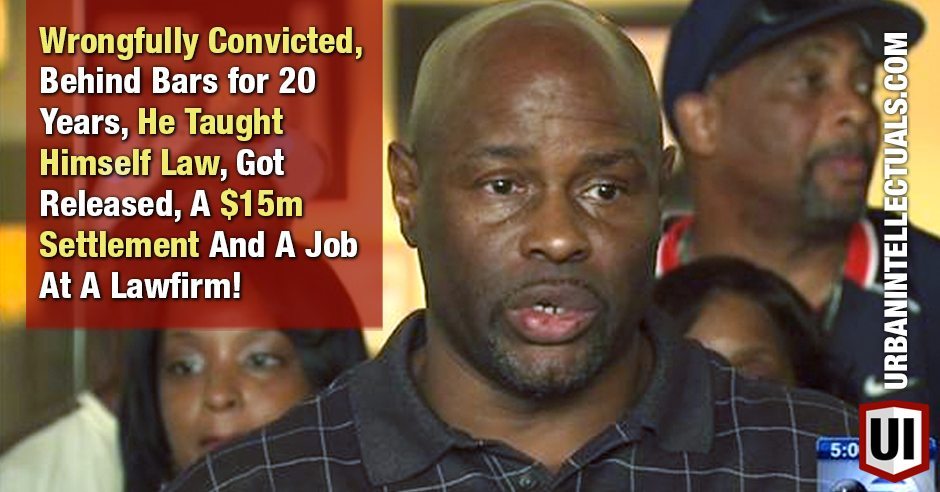 Can you imagine being behind bars for 20 years, for a crime you did not commit, knowing that you had been framed? What would go through your mind, how would you deal with it?

Well, one man used his time very wisely and has finally pulled himself out of jail and settled with the state. Rodell Sanders was awarded $15 million on September 28th.

Sanders managed to gain the assistance of the University of Chicago’s Exoneration Project and managed to get his freedom 2 years ago. He was imprisoned for murder in a 1993 gang hit, many retrials, and investigations proved he did nit commit this crime.

Rodell was lucky that a the last surviving member of the hit confessed in a letter to Sander’ girlfriend six months after the incident. According to the Chicago Tribune, he wrote:

“I know that you are still mad at me for helping the police to lie on Rodell about that murder,”

“But I was scared. Like I told you before, the police told me to lie on Rodell and put his name on this (expletive). … They wanted Rodell instead of me because they need me to come to court on another case, then help them put Rodell away forever.”

The letter goes onto say that Chicago Heights Police framed Sanders. Rodell believes that two detectives cropped a photograph to create evidence against him.

Rodells family stuck behind him, they raised $1k so he could learn law and push for a retrial. He had to cross examine almost a dozen witnesses and put forward court filings.

“From day one, I said they framed me. No one believed me. And now it’s finally come out. I don’t know if it makes things right. I will never get back the 20 years they have taken from me. [And] I lost those years with my family, with my children.”

Sanders went onto work for the law firm that helped free him and now he is a grandfather he is using his settlement to relax and spend time with the kids.

Chicago Heights say they settled because it was better for the tax payer, not because they did anything wrong!

He will never get back those years but it’s remarkable story. The story of a man’s willpower, his true grit and his personal fight against corruption and injustice.

The fact that he went onto work for the lawfirm that helped him says volumes about him and his true character.

We hope he can enjoy the life he has now, it must be bitter sweet, knowing in some ways he beat them (even though they still won’t admit wrongdoing) but on the other hand knowing you can never get the lost time back or fully reverse the mental damage.