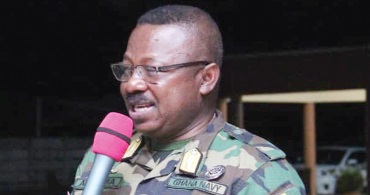 The Chief of the Defence Staff (CDS), Vice Admiral Seth Amoama, has expressed worry that West Africa’s potential to develop has been saddled with the unpleasant reputation of being the most dangerous region in recent times.

Apart from coup d’etats, the constantly evolving terror threat in the region made it even more worrying for governments in the region to harness the vast resources under a peaceful environment to enhance the well-being of the citizenry, he said.

At the closing ceremony of a two-day extraordinary session of the ECOWAS Committee of CDSs meeting in Accra last Friday, Vice Admiral Amoama, who is the Chairman of the Committee of CDSs, noted that the challenges, undoubtedly, continued to hamper the aspirations of people in the region.

Dubbed the Accra Initiative, the meeting discussed the very critical security challenges within the region and the pivotal roles the CDSs of the respective countries played in shaping the defence and security policies toward reducing the incidence of terrorism and political instability.

The conference was organised under the direction of the Authority of Heads of State and Government in fulfilment of the commitment in creating a peaceful region for socio-economic development.

The military chiefs of Mali, Burkina Faso and Guinea attended the meeting at the behest of the ECOWAS Chairman, President Nana Addo Dankwa Akufo-Addo.

They were allowed into the meeting for resolutions to counter acts of terrorism and insurgency, considering that Burkina Faso especially shares a common border with Ghana and a spillover of terrorism could have consequences for Ghana.

Vice Admiral Amoama pointed out that the enormity of the challenge, and the fact that it might engulf the entire region if the military forces did not fast-track their collective efforts, should influence a formidable joint force.

“It is my fervent prayer that we will continue to support our shared decisions and actions, particularly, in ensuring a formidable joint force that is well trained, well-motivated with the requisite capacity and logistics to deal with the security challenges within the region,” Vice Admiral Amoama said.

He pointed out that the thorough discussions on the situations in the Gambia, Guinea Bissau and the issues of the frontline countries such as Niger, Mali, Burkina Faso and Chad required the effective implementation of the proposed strategies and solutions aided by adequate funding and robust logistics support.

“We hope that the ECOWAS Commission will continue its efforts in exploring other sources of funding to support our governments,” Vice Admiral Amoama said.

He also acknowledged the pivotal role the ECOWAS Commissioner for Political Affairs, Peace and Security, Gen. Francis Behanzin, had played which had been valuable to the efforts in reducing the incidence of terrorism and insurgency.

For his part, Gen. Behanzin said the engagements with the military chiefs were aimed to analyse the situation to see how they could coordinate their actions to combat terrorism.

He said the five-year plan of action adopted by the ECOWAS heads of state had eight components, beginning with training, equipping the defence forces in the region, sharing information and intelligence, border control and community sensitisation.

He highlighted that the lack of good governance continued to impact on the region’s young population through unemployment.

Gen. Behanzin congratulated Vice Admiral Amoama on the leadership he had shown towards the committee.

He challenged the military forces to also extend a hand of friendship to civil societies, individuals and communities as they sought to make the region safer to harness its resources for the overall development of the region.