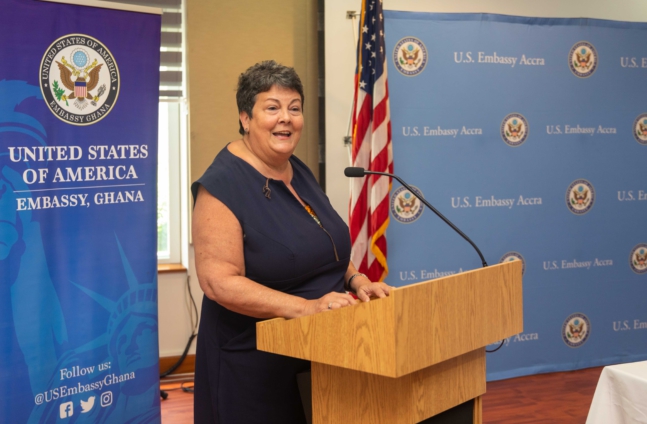 United States Ambassador Virginia Palmer says calls for the protection of the rights of persons of same-sex orientation should not be misconstrued as an attempt to promote such interests.

Speaking on JoyNews‘ Foreign Affairs with Blessed Sogah last Friday, the foreign diplomat noted that discrimination of all kinds is bad, hence the need for social protection measures to protect the minority group.

“I also want to be really clear that we are not trying to be promoting homosexuality or anything like that. We don’t want your straight children to be gay, we want your gay children to be safe and I think it is very important that any sort of threat on one group demonstrates that the rights of other people can be encroached upon and discrimination of any kind frankly, is bad” she said.

Gay sex is already punishable in Ghana with a prison term of three years.

The venue was later closed down by police after public protests.

The LGBTQ bill seeks to increase jail terms to up to a decade and force some to undergo “conversion therapy.”

It also makes cross-dressing and public displays of same-sex affection punishable by fines or detention and makes the distribution of material deemed pro-LGBT by news organisations or websites illegal.

Christianity is the largest religion in Ghana, with about 70% of the population belonging to various Christian denominations.

A UN human rights expert has said that the bill “will promote a system of state-sponsored discrimination and violence” against sexual minorities in Ghana.

There is no law in Ghana that says being LGBT is illegal. But same-sex relationships are criminalised by a penal code – introduced by the British when they ruled Ghana – that mentions “unnatural carnal knowledge”.

In its 2021 annual Country Reports on Human Rights Practices, the US Department of State expressed concern about significant human rights issues such as “crimes involving violence or threats of violence targeting lesbian, gay, bisexual, transgender, queer or intersex persons; the existence of laws criminalizing consensual same-sex sexual conduct between adults.”