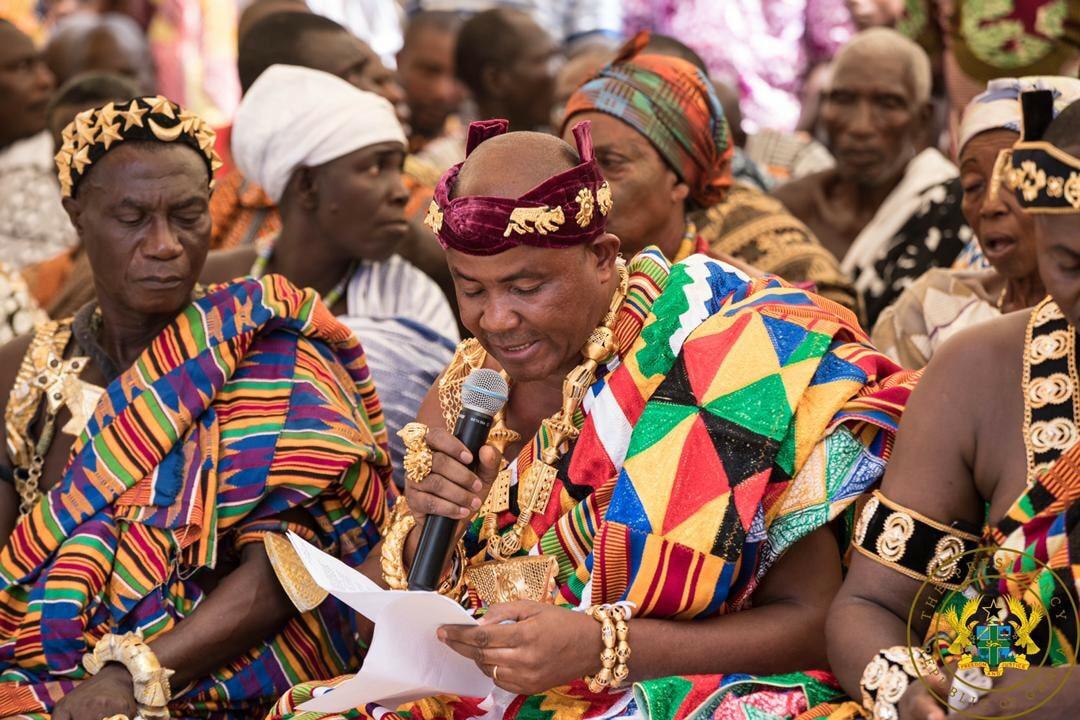 The Paramount Chief of the Jasikan Traditional Area, Nana Abram Akpanja VI, says the Ghanaian people, and, indeed, the people of Jasikan, are “not ignorant about the numerous achievements” of the government of President Akufo-Addo, “within a record period of two years of being in office.”

According to Nana Abram Akpanja VI, “the management of Ghanaian economy, under your leadership, has led to a big drop in inflation rate to a single digit of 9%, whilst economic growth has doubled from about 3% to 6% in two years of your rule.”

He indicated further that “the agricultural and services sectors have recorded over 100% growth from what you inherited during the short time of your regime. This, together with other factors, have resulted in a decline in interest rate, thus creating a better climate for business and growth.”

The Jasikan Chief made this known on Tuesday, 14th May, 2019, when the President of the Republic, Nana Addo Dankwa Akufo-Addo, commenced a two-day working visit to the Oti Region, as part of his 6-day tour of the Oti, North East and Savannah Regions.

Nana Abram Akpanja VI indicated further that “under your regime, Ghana’s economic performance is on record as one of the best in Africa currently”, adding that “under your human capital programme, the Free Senior High School policy has opened up immeasurable opportunities for more young Ghanaians”.

He also thanked President Akufo-Addo and his government for “being the political midwives that oversaw the safe and successful delivery of the Oti Region.”

Being the father of the Oti Region, Nana Abram Akpanja VI stated that “we can never find the appropriate words to convey our joy, appreciation and gratitude to you (President Akufo-Addo) for making this half-a-century old dream of our people, including our ancestors, come true in our time.”

With the demand for the Oti region beginning in 1954, before Ghana gained independence, the Jasikan Chief stated that “Buem, Biakoye, Sall, Jasikan, will forever be grateful to Nana Addo Dankwa Akufo-Addo and his government for demonstrating boldness and commitment to principle, notwithstanding the strong, needless opposition against the Oti project by people who had always wished that we, in this part of Ghana, remained relatively less developed for reasons best known to them.”

Notwithstanding their disappointment at not having the regional capital of Oti sited in Jasikan, Nana Abram Akpanja VI was delighted by the commitment expressed by President Akufo-Addo to ensuring an even spread of developmental infrastructure in the region.

He, thus, urged President Akufo-Addo to consider locating the soon-to-be constructed Oti Regional hospital at Worawora, and a University of ICT and Urban Planning at Jasikan, explaining that “this could go a long way to compensate for the leadership role, efforts and expectations our people had invested towards the creation of the Oti Region.”