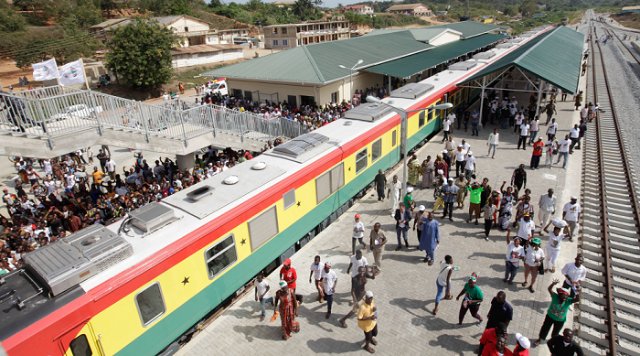 ‘’These coaches penciled down for movement to Tema, unfortunately were part of the new coaches secured by the NDC government to revive the railway sector, using the Kojokrom line as the starting point’’ a statement issued by the party said.

According to the NDC, it has credible information to the effect that plans are far advanced to transport the coaches from Sekondi to Tema by road, adding that the management of the Ghana Railway Company must take steps to halt the move immediately.

They added that government should procure new set of coaches if indeed it wants to show that it is doing something really significant in the railway sector.

The NDC Communication Bereau  in Western Region has discovered that the Nana Akufo Addo government is seriously plotting to move coaches purchased by the administration of President John Dramani Mahama from Sekondi to Tema.

These coaches pencilled down for movement to Tema, unfortunately were part of the new coaches secured by the NDC government to revive the railway sector, using the Kojokrom line as the starting point.

Under this bizarre circumstance, we in the NDC will not allow the NPP government to shortchange the people of Sekondi Takoradi.

Ladies and gentleman of the media, the entire residents of Sekondi Takoradi and for that matter Western Region as a whole,  are  not happy with the current happenings in the railway sector following this development being forced down the throat of Ghana Railways Company by an irresponsible government.

We all know the heartbeat and headquarters of Ghana railways is the Sekondi Takoradi division, therefore any attempt to crumple its operations will automatically collapse the industry.

The railways  after series of attempt by successive governments to revive it saw a major paradigm shift from how things were done.

Then came the ultimate hope provided for its operations to commence when the previous NDC government under John Mahama  strategically invested huge sums of the nation’s resources into the re-construction of the Sekondi Takoradi kojokrom rail lines.

This included the construction of modern railway stations along the Sekondi, Kojokrom and Takoradi rail lines.

It will interest Ghanaians to know that each set is made up of 6 air-conditioning coaches which government commissioned in November 2016 and started plying through its major designated routes same period.

Subsequently, after the change of government,  the current administration in many unproductive attempts made to steal that great achievement chalked  by John Mahama, rather resorted to the use of their media cabal to twist facts and skew the railway success story to favour this government.

Ladies and gentleman of the media, that is another matter we will address later, but the bone of contention now is the attempt by the NPP government to transport one of the  DMU trains that was purchased by the previous government for the Sekondi – Takoradi lines to Accra to deceive Ghanaians that they have bought new coaches for Ghana railways.

Reliable information from the workshop of the Ghana Railway Company is that plans are far advanced for transportation of these coaches to Accra via road.

The NDC Communication block here in Western Region and citizens of Sekondi Takoradi will want to humbly advice the management of GRC, to halt any arrangement towards this move as a matter of urgency.

If the NPP government is serious and want Ghanaians to see that they are really doing something in the railway sector, they should purchase new set of coaches for the Tema Accra lines, after all, they are very lucky as a government to have benefited so much in terms of revenue and loans.

We want to urge Ghanaians to join the campaign to kick against the movement of the coaches from Sekondi Takoradi to Tema.

As a political party, we will continue to play our watchdog role as a responsible opposition party waiting to wrestle power  in 2020 to streamline most of these adhoc measures being employed to deceive Ghanaians.

Together as responsible citizens, let us all rise up and kick against bad decisions this government is making to fuel bad governance.