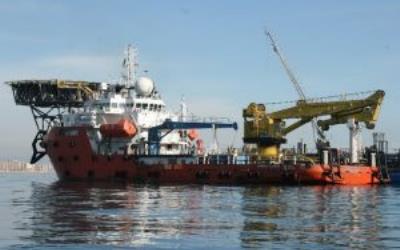 A Panamanian registered pipe laying barge, DLB Sea Horizon, which has been arrested in Sekondi since September 2018 on the orders of an Accra High Court and currently lying  at the Sekondi Naval Base may  be sold to offset debts running into several millions of Dollars.

Lawyers for the vessel owners, (an American company by name WAG SPV 1 registered in Houston Texas) are seeking the release of the vessel at an Accra High Court. Investigations by BestNewsGH.com has revealed that the owners of the vessel, DLB SEA HORIZON are also the owners of Ranger Subsea Nigeria Ltd (a joint venture made up  of some Americans and some Nigerians)  through which services were provided by various vendors in Nigeria for oil companies. It is also alledged that even though the owners (WAG SPV 1) received payments for services rendered, they failed to pay the vendors through whom the services were executed.

Further investigations by BestNewsGH.com including a perusal of documents filed at the Registry of the High Court Accra, reveal an intricate and complex corporate structure of WAG SPV 1 an investment fund company hiding under the corporate veil and purposely designed to shield it from actions by vendors for non-payment of services and supplies.

In the case before the Accra High Court in which Fortune Global Logistics company Ltd has sued the owners WAG SPV 1,  the vessel, and six others  claiming an amount in excess of $3million,  the Court ordered the owners of the vessel to post security for the release of the vessel which the owners have failed to do till date, causing the vessel to incur unnecessary maintenance expenses including crew wages which according to Wallem, the Ship Managers, has not been paid for over three months.

Further investigations by the legal bureau of BestNewsGH.com has revealed that the Accra High Court has ordered the release of the vessel for failure of the plaintiffs to pay security for costs and for a lack of further and better particulars. Lawyers for the Plaintiffs, Alliance Partners  are pursuing a stay of execution of the order and have meanwhile appealed the decision of the High Court and called for a sale of the vessel with the proceeds kept in an interest yielding account pending full trial.

As at the time of filing this report, Rangers Sub Sea Nigeria has been closed down by the owners.

A major twist to the matter is that even though WAG SPV 1 is aware of the arrest and pending suit in Ghana, it has sued Fortune Global in the United States of America, claiming amongst others a declaration of title to the vessel DLB Sea Horizon..

Lawyers for Fortune Global Limited are calling for a full trial of the case to enable them pierce the corporate veil to unearth the complex structure of the investment Fund Company WAG SPV 1 which in turn is said to the owned by Suntx LLc, in order to ventilate the claims of vendors.

The Managers  of the vessel, Wallem who are in Hong Kong according to investigations by BestNewsGH.com have also been seeking to assist the crew who have not been paid for the last three  months and to have them repatriated to their various countries.

The owners have blatantly refused to support the crew, which may mean that the vessel will have to be sold to settle claims by the crew members and the various companies they owe.

This comes on the heels of the fledging and expanding oil and gas industry in Ghana and local companies may want to do a lot of background checks and due diligence before entering into any Joint venture arrangements  with foreign entities.

More on this developing story soon