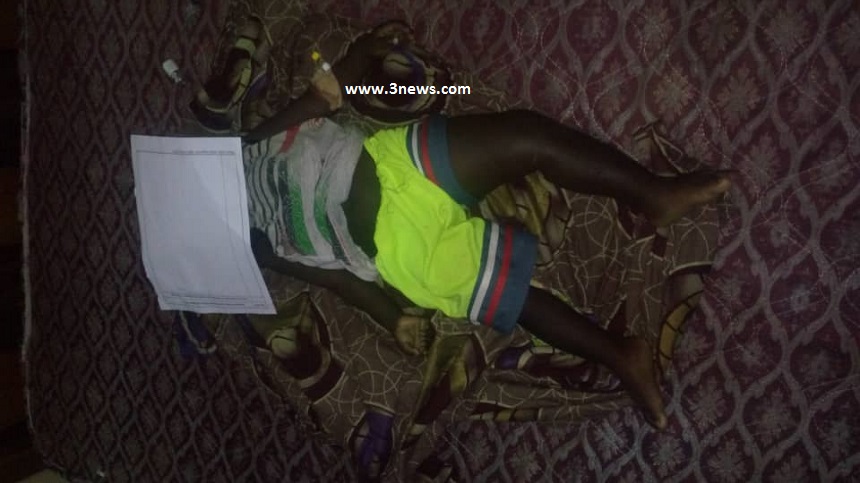 A two-year-old boy who was allegedly refused treatment for snake bite at the Upper West Regional Hospital in Wa has died.

The boy was bitten by a snake in a Bambara beans farm at Boli in the Wa municipality Saturday, and the mother had to carry him on her back to trek more than 3 kilometres to a CHPS Compound in the area where he was given first aid before being referred to the regional hospital.

He was then carried on a motorbike together with his mother and aunt for about 45-minute journey from Boli to Wa.

They arrived at the regional hospital at about 2:00 p.m. but health workers there allegedly asked the boy’s mother to get a folder before treatment could be administered.

Workers in charge of the folder room were, however, said to have abandoned their duty post at the time.

The distraught relatives of the boy went back to inform nurses at the emergency ward about the development, but they allegedly insisted on their demand for a folder before any treatment could be given to the boy.

According to relatives and an eyewitness, the nurses refused to admit or even give the little boy any form of treatment or attention because they could not get the folder.

“We were asked to go for a folder if not we wouldn’t get treatment. We went to the folder room but there was nobody there, and the nurses insisted they will not attend to us until we have the folder,” Salia Abudu who transported the boy and his relatives to the hospital told 3news.com.

In their desperation, Abudu said they went to inquire about the whereabouts of persons in charge of the folder room from a nurse at the OPD department but the said male nurse got angry.

“One big man who was at the OPD taking vital signs even angry at us when we asked the whereabouts of the people in charge of the folder room so we sat at the Hospital up 6:00 p.m.” he claimed.

According to Abudu, they were scandalised by the attitude of the health workers on duty at the time, noting both the boy’s mother and aunt became helpless after waiting for four hours without getting any treatment for the boy.

“We were advised to go and unfortunately, the boy died upon arriving at the CHPS compound,” Abudu told 3news.com

Residents who got wind of the incident are reportedly angry and are demanding heads to roll at the hospital for the alleged negligence.

When contacted, the acting director of the regional Hospital, Dr Emmanuel Steve Blankson, said the matter had not come to his attention, but assured he will investigate to “know what actually happened on the ground”.

He explained that the hospital has put in place measures to take care of all emergency cases at the facility including snake bites.

Dr Blankson indicated that even in situations where victims with emergency cases are brought in unconscious without any relative, they are given treatment by health workers, and cited a similar incident where an accident victim brought in Saturdaay was rushed to the theatre.

On the issue of folder, he said the practice has been that where a patient requiring an emergency care is brought in without a folder, they pen down the patient’s information on a sheet of paper until such a time his or her folder will be ready and the information transferred unto it.

He assured that he will look into the two-year-old boy’s case to know “whether at any point because of folder somebody didn’t get care”.