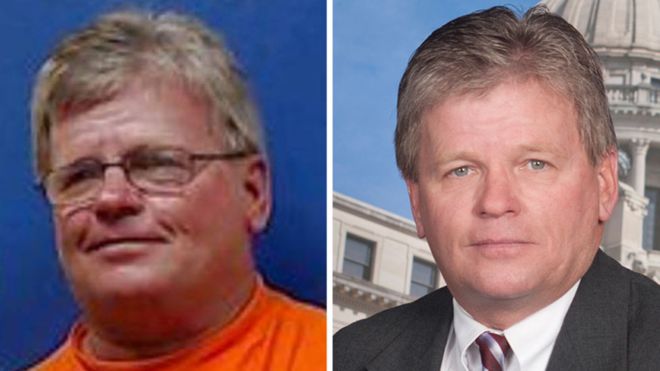 A Mississippi state lawmaker has been accused of drunkenly assaulting his wife because she was taking too long to undress for sex.

Doug McLeod, 58, was arrested on Saturday night in George County on a minor domestic violence charge.

His fellow Republicans in the state said Mr McLeod should resign immediately if the claims are true.

Mr McLeod, a father-of-three, did not immediately respond to a request for comment from the BBC.

When police arrived at his home in Lucedale, 150 miles (240km) south-east of the state capital Jackson, they found Mr McLeod intoxicated with an alcoholic beverage in hand, according to an official report viewed by the Sun Herald newspaper.

Deputies described Mr McLeod as slurring his speech and walking “slow in a zigzag pattern”.

When he was informed police had been called about an alleged domestic assault, he reportedly said: “Are you kidding me?”

According to the Clarion Ledger newspaper, the officers’ report said they found Mr McLeod’s wife and another woman inside the house, frightened.

The other woman told officers that Mr McLeod’s wife had run into her room with a bloody face.

They locked the door and Mr McLeod began banging on the door, threatening to “kill her [expletive] dog” if they did not let him in.

Mr McLeod’s wife alleged her husband had “snapped” – and had done so before when inebriated.

The lawmaker is accused of punching her in the face, bloodying her nose, because she was too slow in undressing to have sex with him.

She reportedly told officers she did not need an ambulance, and her daughter would take her to see a doctor.

Mississippi Speaker of the House of Representatives Philip Gunn, a Republican, said he has attempted to speak with Mr McLeod about resigning if the claims are true, calling the actions “unacceptable for anyone”.

The office of the state’s Governor, Phil Bryant, released a statement saying that “acts of abuse of any kind are reprehensible”.

If the allegations prove true, the governor will join in the calls for resignation, Mr Bryant’s spokesman told the Associated Press.

Mr McLeod, who owns a tyre company, has served in the Mississippi legislature since 2012 and is up for re-election this year, though he is currently running unopposed.

According to the National Coalition Against Domestic Violence, one in three US women have experienced some form of physical violence from a partner.

A 2014 report by the coalition on Mississippi found an average of seven domestic abuse hotline calls per hour in the state.