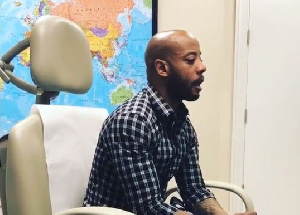 The Football fraternity has been thrown into a state of shock and mourning following news of the demise of former Ghana striker, Junior Agogo.

Reports indicate that the former Nottingham Forest striker passed away on Thursday morning in London.

Tributes have since been pouring in from Ghanaians and non-Ghanaians alike on social media.

It was reported some time back that the former striker was down with stroke, compounded by several other health issues.

Mr Baffoe tweeted: “May his soul rest in perfect peace – rest well Junior Agogo” while Gyan posted: “Gutted.. Thanks for the memories JUNIOR”.