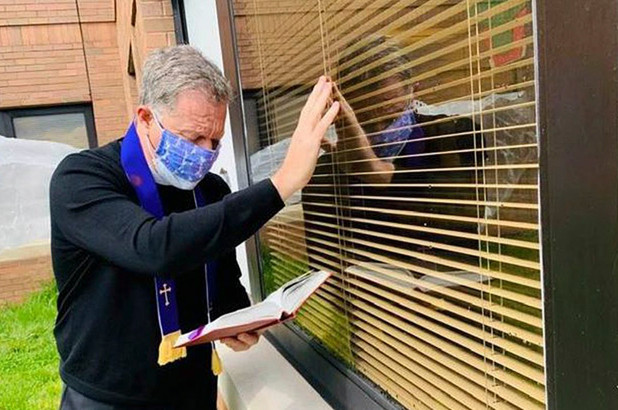 A New Jersey priest was unable to perform last rites on a coronavirus patient in person or over the phone, due to a bad connection — so he decided to administer the prayer through the window of the man’s nursing home room, according to a report.

“I was shaking as I was doing it. I didn’t expect to be. I knew that the sacrament was there whether or not I felt it,” the Rev. Michael Way of Christ Episcopal Church in Middletown told NJ.com.

“I didn’t expect to feel it as powerfully as I did,” he added.

Rev. Fr. Michael Way, who wore a mask as he recited the sacrament, said he could hear the patient mouthing the words to the prayer as the priest held up his hand to the window on April 21.

The patient, his parishioner at Christ Episcopal, was moved to the nursing home in the fall and later contracted the disease. As of Saturday night, the man was still alive, the news outlet reported.

Way said he didn’t hesitate to travel an hour to be with the man.

“That’s almost a better solution than the telephone because I’m so much closer to them, and I think it meant more to this individual,” Way told NJ.com. “And certainly it was more powerful for me, just to be there with him.”

Way has been streaming 14 services per week on Facebook, allowing people to congregate and pray without attending church in person during the pandemic, according to NJ.com.

“The numbers are kind of staggering, because we have three times the number of people who might be attending service physically actually tuning in,” Way told the outlet.

“Either when the service (is) live or later to view it. And people, everybody misses each other so much. But they share, they identify themselves on the comments section and they share the peace virtually,” he added.

“It’s only by the comments that they can interact, but they do, and they get tremendous comfort from seeing the other people online at the same time, so we’re doing what we can do, we’re trying to meet people where they are.”