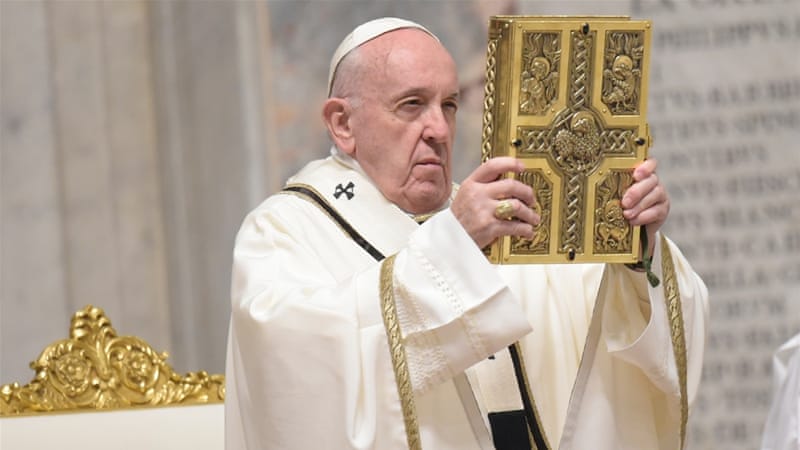 On Monday, Bishop Seitz attended a rally with parishioners and other clergy in Memorial Park in El Paso’s Manhattan Heights neighborhood.

Holding a sign that read “Black Lives Matter,” he sank to his knees and closed his eyes, leading a silent prayer for 8 minutes and 46 seconds, the length of time that Minneapolis police officer Derek Chauvin held his knee on George Floyd’s neck.

Memorial Park was the site of a clash between police and protesters on Sunday, but Monday’s event concluded peacefully. Soon after, a photo of Seitz taking the knee was shared on social media.

In an interview with Catholic News Service, Seitz said he was nervous about making the gesture.

“It’s difficult to know what a bishop should do,” he said. “But I’ve had some excellent advisers — people and priests. I tried to listen to them, listened to my heart.”

“Sometimes, you just have to take the leap into the unknown,” he added.

Seitz’s faith was rewarded on Wednesday, when he received an unexpected phone call after leading Mass.

It was the Pope’s secretary, who said the Holy Father was on the line and did Seitz want to speak to him in Italian or Spanish. Seitz chose Spanish, and was quickly connected to the spiritual leader of nearly one billion Catholics.

The pontiff wanted to congratulate him for speaking out, Seitz said, telling him he also called Archbishop Jose Gomez, the president of the U.S. bishops’ conference, to convey support and solidarity during the civil unrest.

“I told him I felt it was very important at this time to show our solidarity to those who are suffering,” Seitz said. “I told him I had just come from Mass at which I was praying for him and I always do. He thanked me and said that whenever we celebrate Mass, we are praying together, he where he is and me at the border.”

Seitz told the Pope he was “very honored” to serve in El Paso.

The call, Seitz told CNS, showed that the Pope “is aware of what’s happening in this country and is anxious for the church to be responsive in a pastoral way to participate in the response, in solidarity with those who have experienced racial discrimination.”

“It helped diffuse some tension,” he said. “There is something profoundly eucharistic about that and I’m so inspired by our young people. They are teaching us something.”

Pope Francis spoke out against police brutality during his weekly Angelus prayer at the Vatican.

“My friends, we cannot tolerate or turn a blind eye to racism and exclusion in any form and yet claim to defend the sacredness of every human life,” the Pope said. “At the same time, we have to recognize that the violence of recent nights is self-destructive and self-defeating. Nothing is gained by violence and so much is lost.”

After the call, Seitz penned an essay for the National Catholic Reporter reaffirming his commitment to racial justice.

“Frankly, civil rights are not enough,” he wrote. “That’s the minimum and clearly, we’re not there yet.”

“We also need to be building a society with housing, and education and health care and just wages for all as well as the right to migrate,” Seitz added. “And then we can begin to heal.”

Fernando Ceniceros, a spokesperson for the El Paso Diocese, rejected the idea that Seitz was taking sides or playing politics.

“Bishop Seitz is very cognizant of the fact that everyone deserves prayer — every single one, ” Ceniceros told Catholic News Agency. “And that while he is praying for everybody, this is one of the things that needs attention right now.”

Police identified a suspect from surveillance footage and an arrest was made. Authorities were able to recover some of the items taken from Seitz’s residence, including Catholic medals and holy relics.