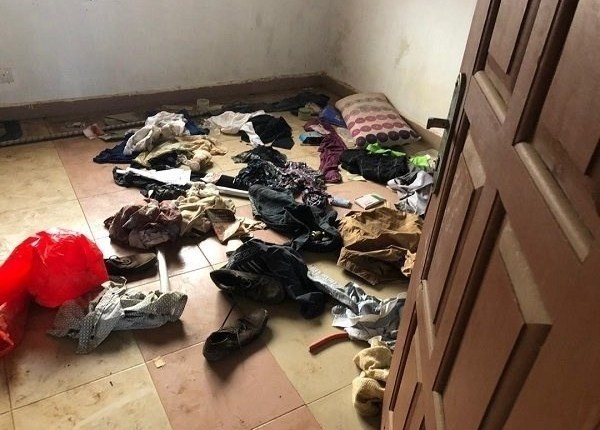 As part of efforts to unravel the mystery behind the missing Takoradi girls, Police investigators have found traces of blood in the room of the prime suspect, Samuel Udoetik-Willis.

The latest discovery comes barely a week after police personnel discovered three human parts at an advanced decomposing state in septic tank at the house which was formerly occupied by the suspect currently serving a jail term.

Police among other things found clothes, earrings, sandals and beads believed to belong to girls whose identities are yet to be unraveled as part of ongoing investigations.

Investigators MyNewsGh.com gathered are still following up on more leads in order to track down all those said to be involved in the crime that has left the country in shock.

On August 6, 2019, police confirmed that a fourth body had been recovered from a well at Nkroful new site in Takoradi, the Western Regional capital by police investigators.

The remains were discovered at an uncompleted building where Samuel Willis Udutoek was re- arrested in connection with missing persons and later convicted for unlawful escape.

Police however reveal that it is only after forensic examination on all the bodies they will be able to confirm if the human parts are those of the girls or otherwise.

“As part of Investigations into the three (3) Takoradi kidnapped girls, the Criminal Investigation Department and the Western Regional Command earlier this evening August 2, 2019 conducted an operation at kansaworodo a suburb of Takoradi. During the operation which took place at about 7pm, some human remains were retrieved from a septic tank at an uncompleted building.

The building was previously occupied by convict Samuel Odeoutuk Willis who is one of the accused persons standing trial for allegedly kidnapping the three (3) Takoradi girls.

The discovered human remains would be sent to the forensic science laboratory of the Ghana police service for analysis and further investigation”, a statement from the police said.