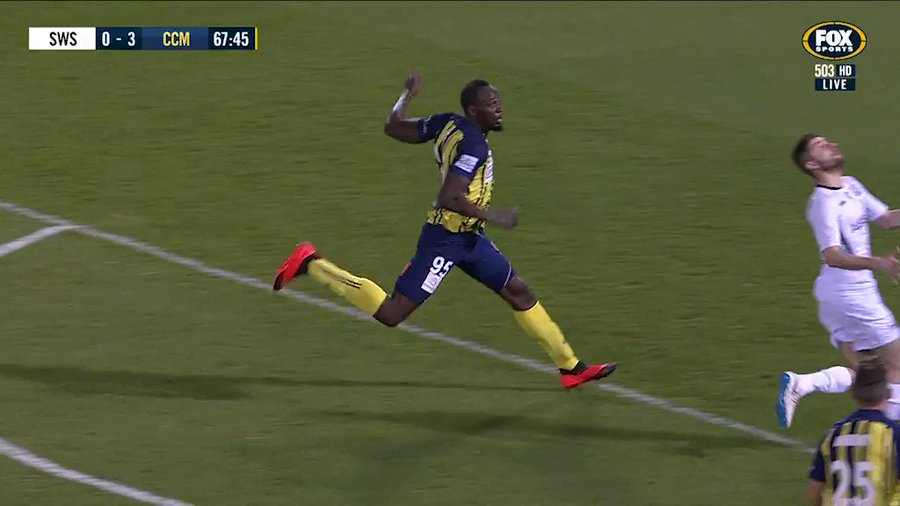 In his first appearance for the Australian club he is on trial at, the former Olympic sprinter scored his first with a well struck effort at the near post, before capitalizing on a defensive error to grab his second. Naturally he pulled out his famous “lightning bolt” celebration after scoring.

“I’m keen to be a Mariner, to play my best and get into the team.”

The CNN reports that Since August the Jamaican has been on an “indefinite training period” with the Mariners, which plays its season opener next Sunday.

Bolt has been limited to pre-season appearances from the bench but head coach Mike Mulvey gave the 32-year-old his first start against Macarthur South West United on Friday.

A huge Manchester United fan, Bolt was open about his desire to play football professionally during his eight-year Olympic reign.

During his period of dominance as the world’s fastest man, Bolt won an Olympic a “triple double,” clinching golds in the 100 and 200 meters in Beijing, London and Rio.

His 2009 world record runs in each event are still intact.

Though the Mariners represent Bolt’s greatest chance of playing professional football to date, the club has previously clarified that the agreement “does not guarantee a professional playing contract.”

While Bolt’s speed isn’t in question, his best position on the pitch is still to be decided — although early indications are Mulvey prefers the 6-foot 5-inch star as a forward.

The Mariners play in the Sydney suburb of Gosford to a capacity crowd of just over 20,000.

It’s a far cry from Manchester United’s Old Trafford — where Bolt said playing would be “epic” and “a dream come true” — but it’s a start.