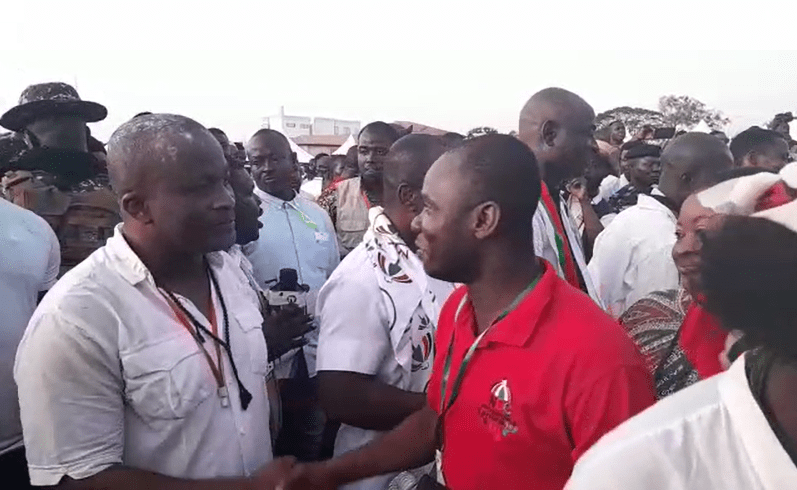 Contrasting fortunes characterised the National Democratic Congress (NDC) regional elections at the weekend, with shocks and surprises in key areas.

The Greater Accra Region saw the biggest upset as the incumbent Regional Chairman, Joseph Kobina Ade Coker was defeated by a former Member of Parlaiment (MP) for Adentan, Emmanuel Nii Ashie Moore, who polled 327 votes against 222 votes obtained by the incumbent.

Other candiates in the chairmanship race were Michael Tetteh Kwetey,Thomas Mustapha Ashong and Kojo Obeng Berkoh who secured 296, 147 and four votes respectively.

Nii Ashie Moore, in 2018 lost to Mr Coker but got a revenge in a keenly contested polls.

Benjamin Xornam Glover reports from the Tema Sports Stadium where the elections was held that another MP for Ablekuma Central, Theophilus Tetteh Chaie retained his position as the Secretary with 719 votes against his sole contender, Victor Quarshie Adonoo, who obtained 281 votes.

The only female who contested with two men for the Deputy Secretary position, Patricia Naa Akuyea Addy, polled 480 votes to beat Baba Abu Abdulai and Godwin Ayaba Mahama who obtained 306 and 212 votes respectively.

In the Volta Region, the incumbent regional chairman, Henry Ametefe, suffered a shocking defeat when he was beaten by Mawutor Agbavitor who polled 203 votes as against 130 votes obtained by Mr Ametefe.

This is 180 votes less than what Mr Ametefe polled four years ago to beat Frank Afriyie for the position.

Mr Agbavitor pulled through the race that had the likes of a former NDC Member of Parliament (MP) for South Dayi, George Loh.

A former Speaker of Parliament, Eward Doe Adjaho, who was present at the Volta regional conference cautioned party leaders and supporters against complacency going into the 2024 general election.

Mohammed Fugu reports from Nalerigu, the North East regional capital, where the elections was held last Saturday, that Alhaji Tanko polled 132 votes as against 40 votes secured by his closest contender, Abdul-Razack, while the incumbent, Mr Sandow, secured 22 votes and Labik Joseph Yaani had 20 votes.

From the Western & Western North regions, Dotsey Koblah Aklorbortu reports that, the incumbent regional chairman, Nana Kojo Toku, received overwhelming endorsement from more than 500 delegates who converged on the Catholic hall at Agona in the Ahanta West Municipality.

Another hot contest was the secretary race and at the end of the polls, the incumbent Regional Secretary, Joseph Nelson, was retained with 265 votes while Michael Otoo, Enoch Kojo Appiah, Famous Tumi Acquah and Mawutor Kofi Senoo obtained 87, 67, 83 and 3 votes respectively.

In the Western North Region, 337 delegates were expected to cast their votes but 335 turned up to vote to elect Michael Aidoo as the chairman with 176 votes to beat Jerry Kankam Dankwa who obtained 127 votes.

From the Upper East Region Gilbert Mawuli Agbey reports that the usual tension, acrimony and anxiety that characterise regional elections was entirely missing as aspirants of some key positions went unopposed,

Alhaji Abdulai Mumuni Bolnaba, who has held on to the Chairman position since 2005 was elected for another four year term.

The position of secretary was keenly contested between Akamugri Donatus Atanga, the incumbent and Anyagri Thomas Abiola who contested for the third time.

Although, some delegates thought the incumbent who has occupied the position for 24 years would surrender his position, he put up a spirited fight to retain his position.

He secured 300 votes to beat Abiola, his only contender, who had 186 votes.

The Women’s Organiser position was won by Fawziatu Quidad Yakubu, who had 28 votes as against 17 votes secured by Rahinatu I. Haruna, the incumbent.

From the Eastern Region, the regional elections for most positions were postponed to next weekend except the elections for the Women and Youth Organisers which were held at Nsawam-Adoagyiri as scheduled.

Haruna Yussif Wunpini reports that the elections were characterised by tension and anxiety.

Mr Nyarko polled 55 votes as against 52 obtained by Mr Mintah to beat his boss hands down.

The event which was held last Friday at the St. Martins Senior High School in the Nsawam-Adoagyiri Municipality in the Eastern Region was initially halted for about 15 minutes.

The disagreement was, however, resolved by a former Eastern Regional Minister and Chairman in charge of the conduct of the elections, Victor Smith, and other party bigwigs who were there to ensure that the election was conducted peacefully devoid of intemperate language on either other.

The delegates voted to retain Shirley Osei Ampem Naana, who was seeking re-election as the Women’s Organiser.

She polled 39 votes to win against her closest contender, Evelyn Korang, a former Eastern Regional Women’s Organiser for 16 years who secured 34 votes.

Emmanuel Modey reports from Wa, the Upper West regional capital, that the incumbent chairman, Abdul Nasir Saani, polled 257 votes to beat his only challenger, Alhassan Adams, who got 177 votes.

It was a field day for the incumbents since apart from the Chairman, six others retained their positions. They are the First Vice-Chairman, Kwame Mumuni, and Second Vice-Chairman, Musah Issah. Others are Secretary, Charles Lwanga Puozung, and Deputy Secretary, Alhaji Nutan Danwana.