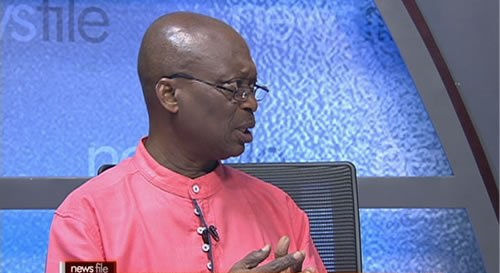 The Managing Editor of the New Crusading Guide newspaper, Kweku Baako Jnr has chastised the General Secretary of the National Democratic Congress (NDC) for his lack of ‘insight’ in a latest Supreme Court ruling.

The Supreme Court has ruled out some provisions of the Presidential (Transition) Act 2012 (Act 845) which terminates the appointment of the Chief Executive Officers (CEOs) of Public Corporations upon assumption of office by a new government.

According to the ruling, “to the extent that Section 14 of the Presidential (Transition) Act 2012 (Act 845) requires the chief executives or director-general (however described) of public boards or corporations to cease to hold office upon the assumption of office by a person elected as President of the Republic of Ghana, the same is hereby declared to be unconstitutional and void for being in contravention of articles 190 and 191 of the Constitution.”

Johnson Asiedu Nketiah reacting to the ruling asked that the dismissed CEOs return to their post.

“I am advising all such categories of chief executive officers and director-generals who were so affected to take appropriate steps to vindicate their rights in the appropriate fora….If I was a dismissed chief executive officer or director-general, I will have gone back to occupy my position without any hesitation because the supreme court has made the appropriate interpretation on the matter,” he told Kwame Nkrumah Tikesie, in an interview on Okay FM, Tuesday.

But Kweku Baako disagrees and explains that Mr. Asiedu Nketia lacks insight into the ruling and must stop commenting on it in order to avoid any embarrassment.

According to him, Mr. Asiedu Nketia’s commentary and subsequent instigation that former CEOs and DGs who have been affected by the ruling should go back to post smacks of a lack of appreciation and understanding of the ruling.