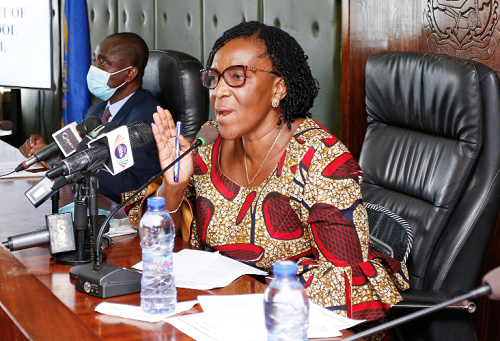 The West African Examinations Council (WAEC) has warned that any false information about the ongoing WASSCE will be detrimental to the integrity of the outcome and can hurt the future of the candidates.

The examination body has, therefore, called on any person or entity that wants to put out information regarding the exam to check their facts thoroughly and also involve WAEC.

The Head of National Office at WAEC, Mrs Wendy Enyonam Addy-Lamptey, made this call at a press conference to react to a report issued by African Education Watch (Eduwatch) on its social media platform.

She said the report was false and needed to be condemned.

The Eduwatch on August 20 this year, alleged in a post on social media the leak of the ongoing West African Senior School Certificate Examination (WASSCE) practicals.

However, reacting to the report, Mrs Addy-Lamptey said: “Reckless circulations like that create needless pressure on WAEC, candidates, parents and our various stakeholders.

“Local and international institutions may doubt the credibility of our certificates, making the Ghanaian child the ultimate loser,” she said.

Mrs Addy-Lamptey said if care was not taken, the reputation of institutions and the nation as a whole could be irreparably damaged in the eyes of the international community.

She said while the council was open to receiving feedback from stakeholders to help it take corrective actions to improve, issuing any false report on the conduct of the examination had the tendency to mislead the public, cause unnecessary anxiety and undermine the credibility of the examination.

Speaking on the operation of rogue websites, Mrs Addy-Lamptey cautioned candidates to be wary of activities of rogue websites as they would deceive them and turn their attention from their books.

“We advise all candidates who have joined such platforms to exit from them immediately and concentrate on their studies,” she added.

Mrs Addy-Lamptey noted that so far, WAEC’s attention had been drawn to a platform called “Smart WASSCE Hub” which was asking candidates to join for assistance.

She said WAEC, together with the security operatives, was on the alert and was working to bring the perpetrators to book.

Again, she said the council had received tip-offs from some concerned persons about plans being hatched and money being collected to enable candidates to cheat during the examination.

She, therefore, cautioned the schools against such acts, adding that “ we will follow up with the necessary actions.”