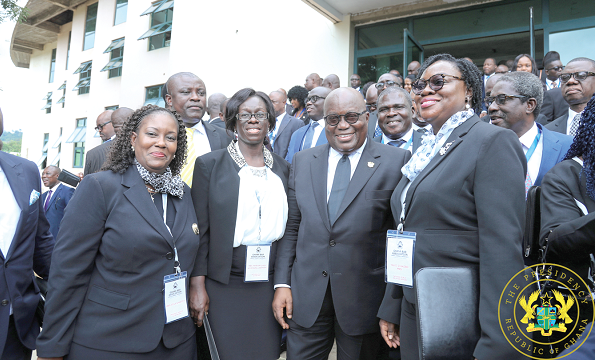 The President, Nana Addo Dankwa Akufo-Addo, has urged practising lawyers in the country to uphold the tenets of the profession and eschew practises that bring the profession into disrepute.

The President was concerned that the conduct of some lawyers who resort to defending cases no matter how bizarre is fast eroding the gains made by generations of lawyers who have remained committed to the goal of securing not only the independence of Ghana, but its body politic and the foundation of respect for the rule of law, individual liberties and the principles of democratic accountability.

“The sad truth is that there has always been lawyers ready to find a way to justify some negative developments no matter how bizarre, and the staunch defence put up by some lawyers a few years ago regarding the payment of fraudulently procured judgement debts are cases in point.”

The President made the call on Monday when he delivered a speech at the 11th Congregation ceremony of the University of Professional Studies, (UPSA), where the first batch of 45 students of the institution’s law faculty graduated.

The President emphasised that upholding law and order is the basis of every organised and progressive society, and thus urged all Ghanaians to be champions of a law-based state whose institutions are solid enough to sanction effectively criminal behaviours even as the country transitions into a state of self-dependency and beyond aid.

The President noted that the theme for the occasion – Celebrating Professional and Scholarly Excellence for Accelerated Nation Building – reinforces his government’s commitment to ensuring that its citizens gain access not only to senior high school education, but also to tertiary education, as well as ensuring the best quality fit for the contemporary needs of the 21st century.

This, he said, is the surest way of equipping the citizenry with the requisite skills for national development.

The President used the occasion to assure the academic community and the nation that the Public Universities Bill, when laid before and passed by Parliament, will not stifle or undermine academic freedom as suggested by some sections of the public.

“The flimsy allegations being perpetrated that the bill will undermine academic freedom are deliberate mischief-making and disingenuous. My government and I are firm subscribers, as the bill amply demonstrates, to the cardinal importance of the principle of academic freedom in the development of all institutions of learning worth their salt,” the President emphasised.

He noted further that government will continue to support collaborative programmes between tertiary institutions and industry to increase opportunities for practical training and internship.

“We shall promote curriculum development to meet the skills and human resource demands of industry, create opportunities for work and study, and make training in entrepreneurship a cardinal component of the school system.”

Furthermore, with a new standards-based curriculum set to be rolled out from kindergarten to Class 6 in primary schools, the President indicated that the new curriculum will focus on making Ghanaian children confident, innovative, digitally-literate, well-rounded, patriotic citizens.

Additionally, the President stressed that all is set for the construction of 21 state-of-the-art Technical and Vocational Education Training (TVET) centres, and in this year, also, 10 Science, Technology, Engineering and Mathematics (STEM) centres are being built around the country to provide support for the introduction of STEM into basic schools.

The President reminded the graduands to uphold the highest standards as they would be judged by the very standards set up by the university.

“I urge you, our graduands, to always keep in mind that you would be judged by the high standards set by your university and as such you cannot afford to let the side down. I am confident you will not, and I am equally confident that you will be responsible, patriotic citizens induced with the values of integrity, honesty and fellow feeling.”

He commended the council and management of the university for placing emphasis on courses relevant to the needs of the Ghanaian economy.

The vice-chancellor of the university, Prof Abednego F. Okoe Amartey, in his report, said the university is committed to human resources development, creating jobs, and developing entrepreneurship as part of its contribution to nation building.

He said the school has in recent years invested heavily in ICT infrastructure and other infrastructure development necessary for the congenial atmosphere for learning, teaching and research in efforts to bridge the link between academia and industry.

Furthermore, he said, the university has received approval for the construction of two multi-purpose buildings and new hostel blocks, all in preparation to admit students of the Free SHS programme.

In all, 326 students graduated with undergraduate and diploma certificates.