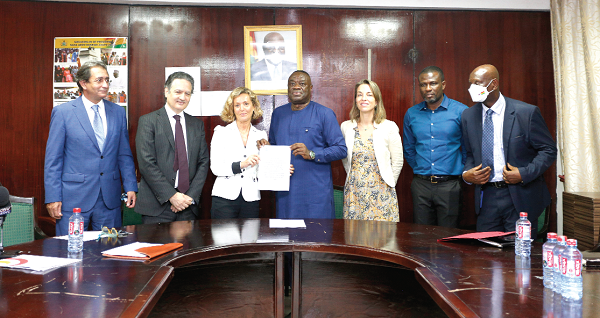 The government has signed an agreement with Spain to facilitate the training of more than 120,000 people in the tourism sector.

As part of the agreement, the Spanish government, through Incyde Foundation, the umbrella body of Chambers of Commerce in Spain, will build a hi-tech smart tourist incubator hub to support the development of tourism in Ghana.

The overall objective of the agreement is to enable Ghana to tap into the tourism expertise of Spain, which is the second most popular tourist destination in the world, with more than 80 million visitors to that country annually.

The Minister of Tourism, Arts and Culture, Dr Ibrahim Mohammed Awal, signed on behalf of the government, while Ms Mar Casanova Llorens of Incyde Foundation signed for her country at an event in Accra yesterday.

It was witnessed by the Spanish Ambassador to Ghana, Mr Javier Gutierrez, and top officials of the Spanish government and the Tourism Ministry.

Dr Awal said the importance of tourism to economic growth and national development could not be underestimated.

He said the sector employed about 25 per cent of the country’s workforce and provided more than $3.5 billion in revenue for the country annually.

“We want to promote the tourism sector, create one million jobs by 2024 and also grow revenue in the sector to $5 billion next year,” he added.

He described the agreement as significant, saying: “We are teaming up with Spain because it is the leader in tourism. Spain has a population of 40 million, but attracts 80 million tourists every year.”

“We think we can learn from Spain’s experience to guide us build a robust tourism sector,” he added.

He said apart from building the capacity of operators in the sector, the agreement would also improve the operations and attract more investment.

“The training will affect all those in the tourism value chain — restaurant workers, hotel owners, travel and tour guides, musicians, film makers and others in the creative industry,” he added.

According to Dr Awal, the agreement was part of the overall policy by the government to build a world-class tourism sector.

He said it would lead to the establishment of a smart tourists incubator in Accra that would churn out data, innovation and other key ideas for the development of tourism.

“The hub will analyse the big data to make the country globally competitive in tourism. We are now number three in tourism in West Africa, behind The Gambia and Senegal. In two years, we want to be the number one tourist destination in the subregion, and this agreement is in line with that drive,” the minister said.

Mr Gutierrez said the agreement was part of the continued partnership and cooperation between his country and Ghana.

He described Ghana as a strategic partner of Spain in the areas of security, good governance and the economy.

“In 2019, Ghana was the third export destination of Spain in sub-Saharan Africa. We share values with Ghana, such as democracy and human rights,” the ambassador said, adding that his country was committed to extending the cooperation to other sectors, including tourism.

Explaining the format of the training, Ms Llorens said her outfit would first organise training for trainers to ensure that the training was sustained.

With regard to the tourism hub, she said, it would consist of experts in the industry, regulatory authorities, researchers and academics who would team up to provide world-class ideas and innovation to promote the sector.

“This will be an ecosystem for companies, start-ups, academia and other stakeholders to boost the tourism sector and make it more competitive,” Ms Llorens said.