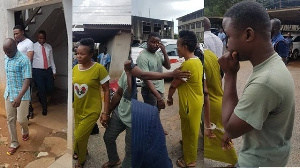 Six more soldiers have appeared before a Kaneshie District Court in Accra for their alleged involvement in plans to attack the Presidency and destabilise the country.

The six including a female soldier are alleged to be members of a non-governmental organization, Take Action Ghana (TAG), formed by Dr. Frederick Yao Mac-Palm, proprietor of Citadel Hospital at Alajo, Accra.

It is turning out that the kidnapping of the president and the overthrow of his government was the game plan of the Alajo doctor and his accomplices.

They are each facing a charge of possession of explosives, firearm, and ammunition without lawful excuse.

This brings to seven, the number of soldiers who have been arrested and are being tried for their involvement in the ‘coup’ plot.

A senior military officer, Col. Samuel Kojo Gameli, together with a civilian employee of the Ghana Armed Force, Gershon Akpa, were put before the court last week, all charged with possession of explosives, firearms, and ammunition without lawful excuse.

Earlier on Tuesday, Dr. Mac-Palm and two others? Ezor Kafui, a local weapon manufacturer (blacksmith) from Alavanyo, and Bright Allan Debrah Ofosu, aka BB or ADC ? were remanded by the court presided over by Magistrate Rosemond Agyiri in connection with the plot.

Eleven persons have so far been charged, and sources say more people could be brought in as investigations intensify.

They are being held for their roles in the alleged stockpiling weapons and Improvised Explosive Devices (IEDs) at Dr. Mac-Palm’s Citadel Hospital in Alajo.

There was a moment of drama when Lance Corporal Godwin Nii Ankrah broke down in tears and was wailing whilst in the dock.

This drew the attention of the presiding magistrate who inquired why he was sobbing.

The judge then asked whether the soldier was hungry or being maltreated by BNI officials.

In response, Lance Corporal Godwin Nii Ankrah said he had nothing to do with the plot.

The magistrate then told him to exercise restraint since he would have the chance to tell his side of the story.

The female soldier also had tears running down her cheeks whilst standing in the dock.

Lance Corporal Godwin Nii Ankrah was represented by Augustine Gyamfi, who was holding brief for Nkrabea Effah Dartey. The rest were not represented by any lawyers.

The prosecuting officer, ASP Asare, urged the court to remand the two as the case was still under investigation and repeated the assurance that the BNI would open its doors to lawyers and relations of the accused persons in preparation for their defense.

The six have been remanded to reappear on October 9 and the judge repeated her order to the BNI to allow lawyers and family members of the accused to pat them a visit.

On the same adjourned date, all the accused persons charged so far in connection with the plot are expected to make an appearance in court.