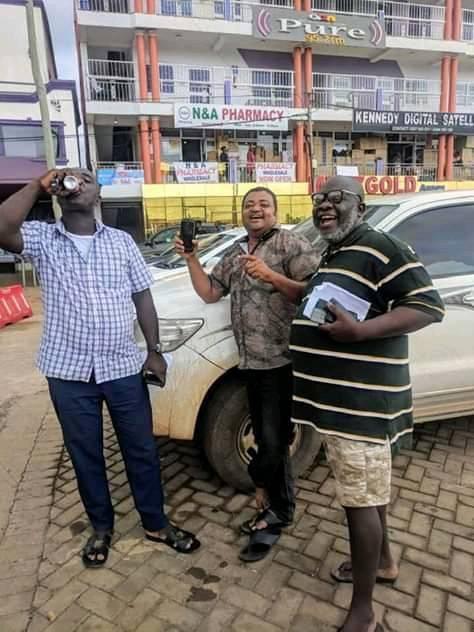 According to her, former Deputy Ashanti Regional Minister, Joseph Yammin, former Municipal Chief Executive(MCE) for Ejisu-Juaben, Afrifa Yamoah Ponkoh and an avowed member of the NDC, Appiah Stadium are all on the payroll of the NPP Regional Chairman.

She posits in a statement available to BestNewsGH.com that the three NDC men are moles planted by the NPP Chairman to work against the current NDC Regional Chairman to label him ineffective.

Read the full text of their statement below:

Ladies and gentlemen of the media I welcome you all to the office of the Ashanti Regional women’s Organiser. I want to use this opportunity to address these embarrassment threatening to our party at this crucial moment when we the current executives especially the women’s wing are preparing to eliminate this super incompetent Nana Addo and Dr Bawumia’s government.

The current Ashanti Regional NDC Executives lead by our able Chairman Mr Augustus Andrews affectionately called Nana Akwasi are a very big threat to NPP and their illiterate and incapable Regional Chairman Mr Antwi Boasiako popularly known as Chairman Wontumi. Mr Wontumi is using his childish and immature tactics in a way of influencing and financing some of our key members who have become a mole in the Ashanti Regional NDC to embarrass the Regional Chairman of NDC.

I want to say it emphatically without no fear or doubt that Mr. Joseph Yamin, Hon Afrifa Yamoah Ponkoh and Appiah Stadium are the said key members of NDC in Ashanti Region who have been meeting Chairman Wontumi underground to collect money for their personal gain and to create impression that our Chairman Nana Akwasi is incapable, by way of praising Chairman Wontumi on media for people to think Wontumi is so powerful, simply because Yamoah Ponkoh and Appiah Stadium are loyalists of Mr. Yamin and their boss Joseph Yamin lost his contest against Chairman Nana Akwasi during the party’s Regional Elections but Mr. Yamin and his stomach greedy bastards the so-called Team Yamin don’t know their actions and comments is preventing the second coming of His Excellency John Dramani Mahama, so we want Hon Joseph Yamin specifically and his team Yamin members Yamoah Ponkoh and Appiah Stadium to come out boldly and curse themselves if they have never collected money from Chairman Wontumi .

Secondly, the Ashanti Regional women’s wing wants to give Hon Afrifa Yamoah Ponkoh 48-hour ultimatum to come out and name and shame the said NDC executives on Chairman Wontumi’s payroll or else we are pleading to the National executives to suspend him for tarnishing the image of our great party particular the Regional Executives.