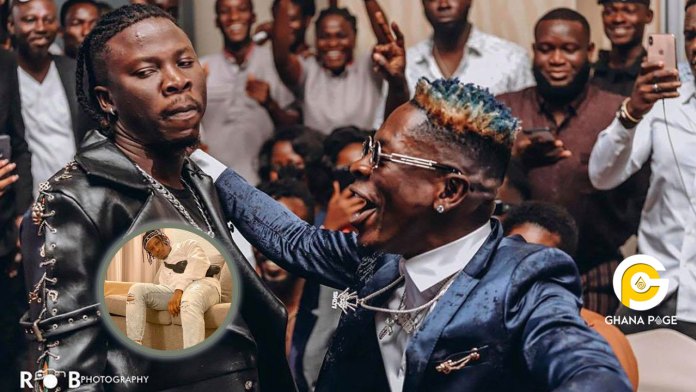 Shatta Wale has joined his new best friend, Stonebwoy to throw jabs at Kelvyn Boy for his constant disrespect towards Stonebwoy.

In a new tweet after Stonebwoy and Kelvyn Boy exchanged words on the need for underground artists to show respect, Shatta Wale warned new artists to pay the maximum respect to pioneers like himself and Stonebwoy.

Shatta Wale explained that most underground artists do not even know what writable CD and Diskette yet they keep on being disrespectful towards their seniors.

Stonebwoy who was tagged in the post took to the comment section to add that they don’t even know what Akuma Village was yet they want to show shoulders.

Shatta Wale tweeted: They never know rewritable CD and Diskette before that be why Dem deh disrespect @stonebwoyb

Whiles performing at the 4Syte TV music video awards 2019 Stonebwoy threw a jab at Kelvyn Boy and told him right on the stage to show respect or “sit well”.

“Big up to Samini, my godfather, and the upcoming wey dem no dey respect, dem for sit well,” Stonebwoy said.

But Kelvyn Boy who was not pleased with the jab took to his social media handles to tease Stonebwoy.

He told Stonebwoy he has a weak soul and he is in pain that he is going higher and higher after leaving Bhim Nation.