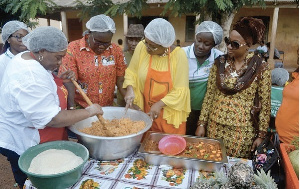 A two-day nutrition training programme has been organised for caterers at Agona Bobikuma and Agona Kwaman in the Agona West Municipality in the Central Region.

The event was aimed at engaging the caterers in the preparation of gari fotor and introducing it onto the school feeding menu in the two districts.

Gari fotor is a delicacy made by mixing gari and sauce into a meal.

Organised by the Ministry of Gender, Children and Social Protection through the Ghana School Feeding Secretariat, the training was held to introduce, sensitise and inculcate the eating of nutritious gari fotor, fortified with vegetables and soy beans into the school feeding menu for the benefit of schoolchildren in the two districts.

Addressing separate durbars, the Minister for Gender, Children and Social Protection, Mrs Cynthia Morrison, said the policy of the ministry was to ensure that foodstuffs produced locally by farmers were made part of the school feeding menu to encourage the eating of locally produced foods.

She noted that the delicacy was to improve the health of the pupils.

She indicated that the ministry would continue to monitor the operations of the caterers to ensure that the foods served to the pupils were prepared under hygienic conditions and of high quality with the needed nutrients.

She said the vision of the government was to ensure that the programme benefited all pupils in public basic schools and, therefore, called on public-spirited individuals in society to consider supporting the government financially to expand the programme to cover more schools.

She cautioned parents against preventing children with disability from going to school, saying “it is totally unacceptable to keep such children in the house at the expense of their future”.

She noted that those children had a lot of potential and that if such talents were well harnessed, it would enable them to become useful individuals in society.

She added that parents should not look on unconcerned as sexual advances were made towards their under-aged daughters, since confronting such men would save their children from abuse.

She lamented that the incidence of rape and defilement was on the increase and that the ministry would step up efforts to protect young girls from sexual abuse and to reduce teenage pregnancy as well.

The acting National Coordinator of the GSFP, Dr Mrs Gertrude Quashigah, said the secretariat strongly believed that the acquisition of new cooking skills by the caterers was very significant as it would help them to be abreast of the new and beneficial ways of cooking local dishes to derive more nutritional benefits.

In another development, Mrs Morrison has also presented 19 laptops and accessories to Social Welfare and Community Development officers from the 19 district assemblies in the Central Region at a short ceremony in Agona Swedru.

At the brief ceremony, she said the move by the ministry was to ensure the computerisation of the Livelihood Empowerment Against Poverty (LEAP) programme so that beneficiaries under the programme across the country could be tracked.

She stressed that with the computerisation of the LEAP programme, the ministry could easily monitor payment to beneficiaries and other operations in all parts of the country with just a click of a button.