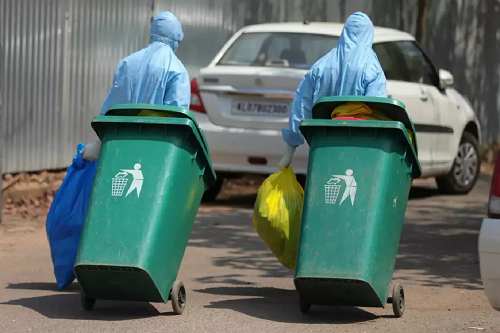 A new research, conducted by WaterAid, an NGO, has found out that sanitation workers have been forgotten as frontline workers in the fight against the COVID-19 pandemic.

The research, carried out in South Asia, Burkina Faso and Nigeria, also found out that many of the sanitation workers in developing countries had been forgotten, underpaid, unprotected and left to fend for themselves during the COVID-19 period.

The NGO released the findings in their research ahead of this year’s World Toilet Day, calling on government to improve the living conditions of sanitation workers as well as prioritising their safety and wellbeing.

In a statement issued on Friday, November 19, 2021, WaterAid said despite providing a vital service in ensuring that human waste was cleared, stored and disposed of safely, sanitation workers were often marginalised, stigmatised and shunned as a result of their job.

It added that many sanitation workers worked on the frontline of the pandemic, throughout national lockdowns, in hospitals and quarantine centres and in the heart of communities with poor access to safe water, decent sanitation and good hygiene facilities.

The research also highlighted the hazardous working conditions, a dangerous lack of PPE, poor training and legal protection, as well as loss of income for millions of people who work as sanitation workers.

The research considered sanitation workers to include people who clean toilets and sewers, empty latrine pits and septic tanks and operate pumping stations and treatment plants as well as those who clear faecal waste manually, sweep rubbish and transport faecal sludge.

According to the research, many sanitation workers indicated that they were forced to go to work during lockdown even if they felt ill, for fear of losing their jobs.

The Chief Executive of WaterAid, Tim Wainwright, said: “The COVID-19 pandemic has highlighted the vital role sanitation workers play in our communities – but it has also revealed the vulnerability of this essential workforce that is often undervalued and overlooked. It’s unacceptable that so many sanitation workers operate without the support and safeguards they need.”

For him, “WASH services are critical to maintaining public health and will be fundamental to surviving and recovering from the pandemic, and future pandemics – but without sanitation workers, these services will not function. It’s important we invest and support the workforce, not just for the sake of public health but also for the economy – to ensure universal access to decent sanitation and a better future for all.”

For his part, Senior Policy Analyst at WaterAid, Dr Andrés Hueso González, noted that “It’s vital governments, local authorities, employers and the general public take action to support sanitation workers so they can do their job safely, with the dignity and recognition they deserve.”

In addition, he said : “These key workers should be protected through legislation, policies and guidelines that ensure workers have appropriate PPE, regular training, a decent wage and access to health insurance and social security.”

For him, “Sanitation workers also need to be recognised, respected and supported by institutions and by individual citizens. We all have a role to play in tackling and removing the deep-rooted discrimination they have endured for far too long.”