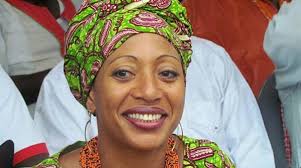 Former Convention People’s Party (CPP) Parliamentarian for Jomoro in the Western Region, Samia Nkrumah, has announced she is coming back for the seat she lost in 2012.

Samia who refused to state which political party’s ticket she will be contesting on, says Parliament needs a third voice beyond the governing New Patriotic Party (NPP) and the National Democratic Congress (NDC).

It’s not only about the constituency she represents “but also about having an independent voice in Parliament,” she told JoyNews Parliamentary correspondent, Joseph Opoku Gakpo, Tuesday.

The politician, who is also daughter of Ghana’s first President, Kwame Nkrumah, began her political career in 2008 by beating the NDC’s Lee Ocran with a majority of 6,571, winning about 50% of the total valid votes cast.

But after serving one term as MP, Samia in December 2012 lost her seat to the NDC contestant, Wing Commander Francis Anaman, a retired Officer of the Ghana Airforce. She had consistently maintained the results did not reflect the actual votes.

She then took her political vocation a notch higher by putting herself up for the contest to lead the CPP ahead of the 2016 elections but failed in her bid.

She was handed a defeat believed to be unexpected after she polled only 579 votes compared to the 1, 288 votes polled by former General Secretary, Ivor Greenstreet.

However, Samia says she is motivated to go back for the seat currently being held by the governing party’s Paul Essien to prove the claim that her defeat in 2012 was biased.

She also doesn’t see her break from frontline politics since her flagbearer contest defeat as a disadvantage.