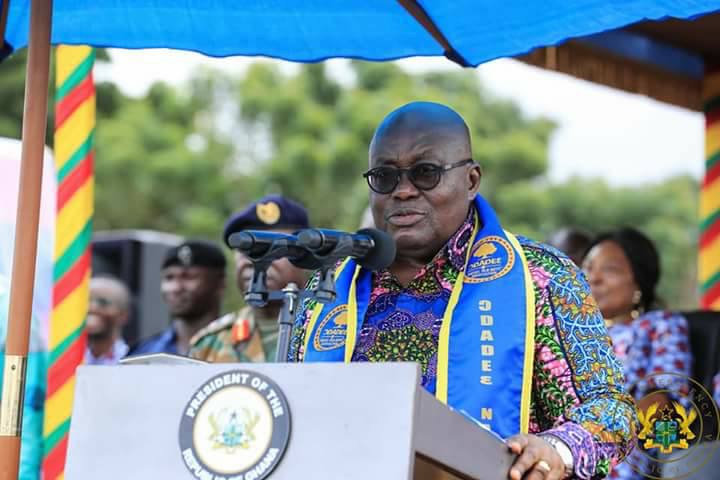 President Nana Addo Dankwa Akufu-Addo has revealed that a total of 12.5 billion Ghana Cedis of public funds went into supporting the seven indigenous banks that collapsed.

“To protect the deposits of the seven defunct banks, the Government, through the Ministry of Finance, has had to issue bonds to the tune of some GH¢8 billion in favour of GCB Bank and the new Consolidated Bank, the banks that took over the operations of the seven failed banks” he said.

The President continued, “This is in addition to liquidity support of some GH¢4.7 billion that had been provided by the Bank of Ghana to these banks over a period before their closure. In effect, GH¢12.7 billion of public funds has been injected into these seven banks, following their malfunction.”

Depositors’ savings, he said, have been safeguarded, job losses have been minimised, and a strong set of indigenous banks is being born.

President Akufo-Addo reiterated his commitment to having two performing indigenous banks in the country than to have seven weak ones, citing recent examples in Nigeria, Malaysia.

“I have no doubt that, if these measures had not been taken, the banking system would have been seriously compromised, with dire consequences for depositors and their savings. We need urgently a vibrant banking sector that can help mobilise resources to finance our industrial, agricultural and economic transformation,” he added.

This, President Akufo-Addo stressed, is the justification for the measures of the Bank of Ghana.

President Akufo-Addo made this known on Saturday, 15th September, 2018, when he delivered a speech at the 80th Anniversary of the Presbyterian Boys’ Senior High School, Legon.

President Akufo-Addo, who was speaking on the theme of the Anniversary celebration “Powerful Past, Prosperous Present, Prominent Future”, stated that alumni (ƆdadeƐs) of PRESEC, many of whom can be described as Ghana’s “Powerful Past” and “Prosperous Present” of our country, have obtained this status and renown because they had access to education.

Future ƆdadeƐs, he added, who wish to become our nation’s “Prominent Future”, can only become so, if they receive an education.

He indicated that a survey of Ghana’s immediate past reveals that between 2013 and 2016, an average, one hundred thousand (100,000) children, every year, who passed the B.E.C.E., could not take up their places in Senior High, because they could not afford the fees, even though they had the qualifications.

If this situation had persisted for a decade, one million children would have dropped out of school at the level of Junior High School, an unacceptable outcome for any nation in the 21st century.

“It would have been too dangerous for Ghana’s stability, as we would have been building a future of hopelessness for our youth. Such a situation was intolerable, and my party and I were determined to end it. That is why the Free Senior High School policy was introduced,” he added.