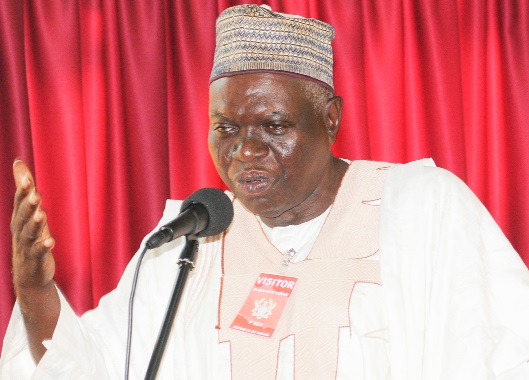 The remains of veteran journalist Alhaji Razak El-Alawa were buried in Kumasi yesterday in line with Muslim funeral traditions.

A quintessential journalist, who was a columnist of the Daily Graphic, he died in Accra last Monday, aged 76.

He was a record three-time winner of the Ghana Journalists Association’s (GJA) Journalist Of the Year, having won the coveted prize in 1975, 1976 and 1978. He was also the runner-up in 1977.

For winning the GJA Journalist of the Year in 1978, Alhaji El-Alawa was sponsored by UAC for a trip to Liverpool, United Kingdom.

His weekly column in Saturday’s Daily Graphic titled “Reflections” was the favourite of many readers.

An old student of Konongo-Odumase Senior High School (KOSS), Alhaji El-Alawa was admitted into the University of Ghana in 1967 for a B.A. (Honours) degree programme in History.

In September 1974, he was posted to the Graphic Communications Group Limited [then known as Graphic Corporation] for his National Service after his post-graduate studies at the School of Communications Studies, University of Ghana.

He was appointed a Staff Writer at Daily Graphic in September 1975, and served as the Northern and Upper Regional correspondent of the newspaper.

Described as a true son of the Commonwealth Hall (Vandal City) of the University of Ghana, Alhaji El-Alawa played an instrumental role in the affairs of the Old Vandals Association, rising to become President of the association from July 2011 to July 2016.

As an undergraduate student, he was Editor of the Echo, a publication by the Commonwealth Hall.

Returning to the Commonwealth Hall in 1973 as one of the pioneer students for the Post Graduate Diploma course in Communication Studies, he became the Editor-in-Chief of the Echo and also Secretary of the Junior Common Room (JCR).

A Yoruba by birth, he played a key role in the affairs of the Yoruba community in Ghana.

Although he lived almost all his life in Ghana, he never lost touch with his roots in Nigeria

When Dr Hilla Limann assumed the Presidency of the country, Alhaji El-Alawa became one of the press secretaries at the Castle.