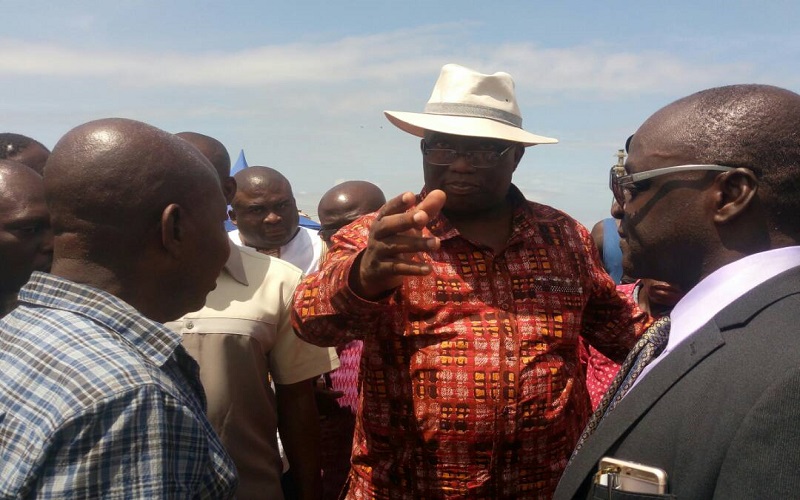 The Ghana Railway Pensioners Association (GRPA) under the Cap. 30 pension scheme have appealed to the government to pay all pension arrears due them following the recent increment in public sector salary.

Government on the 1st January 2017 and 1st January 2019 announced a 12 and a half and 10 per cent separate salary increases in the public sector wage bill.

Per the two salary public sector increases as announced by government, pensioners under the Cap 30 in the public sector were also to enjoy the automatic corresponding increment in their pension salary.

Interestingly, two years after the public sector salary increment, Railway pensioners under the cap 30 have yet to enjoy the increment reflect on their pensions.

In a statement issued and signed by the Chairman of the Railway Pensioners Association, Mr. Francis Koomson, Samuel Baidoo, General Secretary and Robert Johnson, Treasurer, the association called on the government to speedily pay all pension arrears due them from last two years since increases in public sector wage was announced.

Giving background into the story, the press statement said in accordance with Government Standing Order as contained in the Controller and Accountant General Circular with Reference CAG/Adm.3035/95/40 and dated the 11th September 1995, the Railway Cap 30 Pensioners under the Public institution would enjoy pension increases as and when serving officers (workers) were granted increases in salaries.

What this means is that, whenever there was a salary increase for serving officers (workers), the increases would reflect on the salary of pensioners of Railway under Cap 30. The statement added that on the 1st July 2017, active serving workers of Ghana Railway were granted 35% increment in salary by the government.

On 1st January, 2017, and again on 1st January 2019, government announced a 10% and 12 and a half per cent salary increment respectively for public sector workers.

Considering the CAGD Circular as explained above, two separate salary increment for public sector workers should automatically correspond in the salary of pensioners.

Read the full statement below

Cap 30 in accordance with the Government Standing Order as contained in the Controller and Accountant General Circular Ref: CAG/Adm.3035/95/40 dated 11th September, 1995, the Railway Cap 30. Pensioners under Public Institutions will enjoy pension’s increases as and when serving officers were granted increases in salaries.

In effect, whenever there is a salary increase for serving officers, it should reflect on the salary of pensioners of Railways under Cap 30. In 2017, 1st July, active serving officers of Ghana Railway Workers were granted 35% increment in salary.

By the standing orders as contained in the Controller and Accountant circular, the 35% increases in salary of active serving officers should reflect in the salary of pensioners under Cap 30.

Our counterpart on Cap 30 in other Public sector was, on the other hand, granted 12 and a half per cent increase by government with effect from 1st January 2017 and again 10% increase with effect from 1st January 2019. Interestingly, neither of the two increments (35% and 12 and half %) respectively had reflected in the salary of pensioners under Ghana Railway Cap 30 scheme to date.

This development compelled the executives of the Ghana Railway Pensioners Association to find out from the Controller and Accountant General why the two increments have not reflected in our pensions.

Our enquiry revealed that the government of Ghana through the Ministry of Finance had directed the Controller and Accountant General not to pay increment to Railway pensioners under Cap 30 when there is salary increment.

Government according to the Controller and Accountant General Department had directed that due to fiscal constraints, Government would no longer be able to absorb the pensions of retired staff of public institutions who negotiate salary increments higher than what has been granted the Public sector.

Henceforth, such institutions are to pay the monthly pensions of their retired staff. Attach is the Controller and Accountant General circular. Following this and in our attempt to comply with the government directive, we petitioned our sector Minister, Hon. Joe Ghartey, Minister of Railway Development on the 30th November 2017 to seek audience with him over the directive as contained in the Circular.

The sector Minister did not respond to our petition. We then petitioned the president of the Republic, Nana Akufo Addo in a letter dated 15th June 2018.

We did not hear from the two so we went ahead and petitioned the Managing Director of Ghana Railway Company Limited, our former employer to grant us audience for a meeting to deliberate on the new Controller and Accountant General directive.

This petition was dated 12th December 2018. To date, neither our former employer-Ghana Railway, the Railway Sector Minister nor the President has responded to our petition.

At a meeting held with the entire membership of the Railway Pensioners under Cap. 30 Association on the 6th of June 2019, the meeting came to the conclusion and resolved as follows:

We requested that all Railway Cap 30 pensioners under the Public Institutions should be treated equally with other pensioners in public sector as far as increases in pensions are concern.

By that, we are appealing to Government through the media to pay us all the arrears based on the 12 and a half per cent and the 10% increase granted all Cap 30 pensioners in the Public Sector.