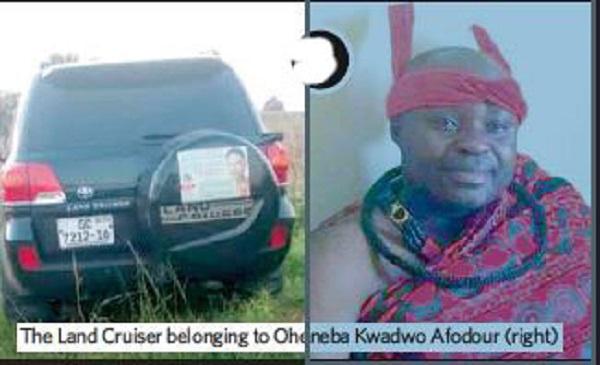 Nana Yaa Asantewaa Bonsu, who is the queen mother of Pakyi No 1 in the Amansie West District of the Ashanti region who is an accomplice to the prime suspect in the murder of Otumfuo Asamponhene, Oheneba Kwadwo Afodour has collapsed in police custody, MyNewsGh.com

The Queen Mother who is the wife of Alhaji Mohammed Sadat reportedly turned herself in to the police on Tuesday, September 17, 2019, but collapsed in police custody in the night, MyNewsGh.com has learned.

She was said to have been rushed to a health facility in Kumasi where she is said to be on admission responding to treatment under heavy security guard.

Meanwhile, INTERPOL has handed over Alhaji Mohammed Sadat, the prime suspect in the murder to police in Kumasi on Wednesday dawn, MyNewsGh.com can confirm.

The suspect was arrested at Ouagadougou in Burkina Faso, a police source has told this portal.

The Ashanti Regional Police Command is however yet to make an official communication on the development.

It would be recalled that the deceased chief was stabbed multiple times before his Landcruiser vehicle was set on fire by his assailants according to Ashanti Regional Public Relations Officer (PRO) of the Ghana Police Service, ASP Godwin Ahyianyo disclosed on Accra-based Adom Fm monitored by MyNewsGh.com.

The Police officer said they received information that a Toyota Landcruiser with registration number GC 7212-16 had been involved in an accident on the road around Ebuom, a community on the Nkronza-Ejura road but upon arrival at the scene, they realized it was the victim who was later identified as Nana Afodour had been stabbed.