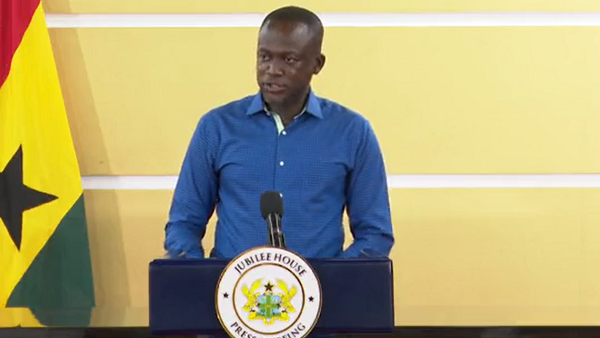 President Nana Addo Dankwa Akufo-Addo has not reneged on his pledge to protect the public purse, the Director of Communications at the Presidency, Mr Eugene Arhin, has asserted.

He said the transformation that had taken place in all aspects of national life in nearly five years, as epitomised in the success story of the free senior high school (SHS) policy, the Planting for Food and Jobs (PFJ) and the One-District, One Factory (1D1F) initiatives, infrastructure development, among other policies and programmes, was enough testimony to a public purse that was being well protected and an economy that had been well-managed.

Mr Arhin made the assertion at a media briefing at the Jubilee House yesterday to update the Presidential Press Corps on developments that had taken place at the Presidency in the last six months.

The assertion by the Presidential Spokesperson was in reaction to questions from journalists regarding recent concerns raised by the Ghana Catholic Bishops Conference (GCBC) and former President John Dramani Mahama on how public funds were being spent.

Speaking at this year’s Plenary Assembly of the GCBC in Wa last Monday, the President of the conference, the Most Rev. Philip Naameh, said: “Though poverty stares us in the face, it appears lost to those with power. The expressed commitment of the President of the Republic to protect the public purse, a promise that citizens welcomed, seems to be an illusion now.”

Mr Mahama, delivering his #thankGhana address to end the nationwide thank you tour last Wednesday, made reference to the sentiments expressed by the GCBC, saying: “Until we are bold to reflect what we are all experiencing under this government, the situation will continue to worsen, and we are all going to be worse off from suffering.”

In his reaction, Mr Arhin said much as the administration of President Akufo-Addo was extremely tolerant of divergent views and welcomed criticism of its work, well-founded and well-grounded criticism was the only way to ensure an honest discourse devoid of malice and propaganda.

He, therefore, urged the GCBC to vary its criticism to ensure that it was well-founded and well-grounded in facts.

“President Akufo-Addo took office in January 2017, and again in January 2021, and pledged to protect the public purse, and that is exactly what he has done, and continues to do,” he added.

Giving further details, Mr Arhin said if, indeed, President Akufo-Addo had superintended over the wanton dissipation of public funds, Ghanaians would not have reposed their confidence in him by returning a decisive margin of victory for him in the 2020 elections.

Taking a look at the free SHS policy, the communications director said the policy had already granted access to over 400,000 more children to SHS and indicated that the progress chalked up would not have been possible if the public purse was not being protected.

In addition, he said, the PFJ, which had brought 1.5 million farmers into its orbit and who enjoyed subsidised inputs, including fertiliser, seeds and insecticides, had ensured that the country no longer imported food items such as tomatoes and plantain from neighbouring countries but rather exported foodstuffs within the ECOWAS community.

That positive story too, he explained, would not have been possible if the public purse was not being protected.

Further on the prudent use of the public purse by the President, the director of communications said 104 factories, through the 1D1F initiative of the government, were operating and providing jobs for thousands of unemployed youth, while 150 more factories were under construction, with the remaining 24 at the mobilisation stage.

“If, indeed, the protection of the public purse was a mirage, the Akufo-Addo government would not have found the means to employ hundreds of thousands of teachers and medical professionals who, before the coming into office of this administration, were sitting at home twiddling their thumbs.

“NABCO, which has brought relief to some 100,000 graduates, would not have been feasible if the public purse was not being protected. This government has found the resources to undertake the largest construction of road infrastructure in Ghana’s history,” Mr Arhin said.

He added that Ghana, under President Akufo-Addo, had recently been adjudged the best place to do business in West Africa.

He said the extensive measures taken by the government in the COVID-19 crisis had gone a long way to protect the people, a feat that was widely acknowledged across the world.

All of those, he said, could not have been achieved by a government that had lost touch with the problems of Ghanaians and was presiding over the reckless dissipation of the public purse.

Mr Arhin said the government was highly focused on delivering on its mandate.

Responding to controversies surrounding the country’s delegation to the UN Climate Change Conference (COP 26) in Glasgow, Scotland, Mr Arhin said: “Let me state for the record that the government of Ghana did not send nor fund 337 Ghanaians to attend the COP 26.”

He explained that three categories of people were permitted to attend the conference — the UN and related organisations and agencies, media and non-profit organisations with observer status and representatives of parties to the convention and observer states.

“From what we have seen so far, it has been shown that not all the 337 people who registered as participants attended the summit. There were media personalities, as well as representatives of civil society organisations (CSOs) who were captured on the list of 337 people and who confirmed that their trip to Glasgow was not funded by the government,” he added.

“For the avoidance of doubt, let me place on record that the official presidential delegation comprised 24 people, including President Akufo-Addo, the Minister of Foreign Affairs and Regional Integration, Ms Shirley Ayorkor Botchwey; the Minister of Energy, Dr Mathew Opoku Prempeh; the Minister of Lands and Natural Resources, Mr Samuel Abu Jinapor; the Minister of Environment, Science, Technology and Innovation; Dr Kwaku Afriyie, and officials of the Presidency and the Foreign Ministry.

Mr Arhin also highlighted events that took place during the six-month tour of President Akufo-Addo to the 16 regions, saying the President had commissioned 12 factories in different districts in the country in furtherance of the 1D1F policy.

He said although 104 of the factories had been completed, the commissioning of the 12 by the President during his tour brought 278 industrial enterprises into being.

He said the President also inspected ongoing work at the Kumasi International Airport and inaugurated a number of water projects, as well as waste management projects, across the country.

In a related development, the Director of Communications for the New Patriotic Party (NPP), Mr Yaw Buaben Asamoa, has urged the GCBC to clarify its criticism of the government’s management of the public purse.

According to him, the Bishops’ criticism would have been considered, but it lacked focus.

“Where are the specifics on that? Some level of clarity at that level is important. It is not about enabling the National Democratic Congress(NDC) to come in and spout,” he said.

Mr Asamoa said it was unfair to link economic difficulties with the protection of the public purse.

He said the government was “widening the social net, and we believe we are sending the economy in the right direction.”

He also attributed the recent struggles to the COVID-19 outbreak.

Mr Asamoa pointed out that in the midst of the challenges, the government had shown “compassion at its highest” with its social interventions to cushion Ghanaians.”

At the opening of the GCBC plenary, the Upper West Regional Minister, Dr Hafiz Bin Salih, noted that the government had over the years followed with keen interest the activities of the GCBC and admitted that the contribution of the Conference in shaping national discourse was phenomenal.

He said the communiqué issued on topical national issues at the end of deliberations at the Conference was of paramount concern to government and there was no doubt it helped government to address some of the issues.

“I want to encourage you to register your views on national issues that border on development as they have the potential in helping government to take an informed decision on them,” the Minister said.