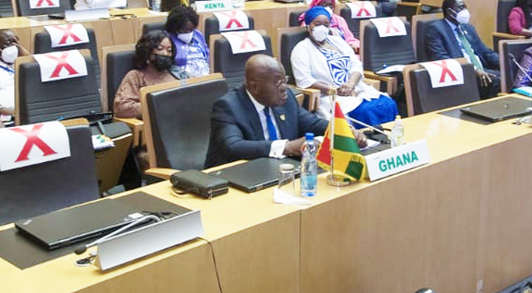 He said a collective effort by the union was key to transforming the size and state of the African economy, as it would greatly help in resources mobilisation on the continent.

President Akufo-Addo made the call yesterday at the 35th Ordinary Session of the Assembly of the AU in Addis Ababa, Ethiopia, scheduled for February 5 and 6, this year.

Delivering a report as the champion of the African Union Financial Institutions (AUFIs), the President said enhanced resources mobilisation on the continent would provide the necessary impetus for growth, job creation and economic revitalisation.

President Akufo-Addo said although there was an ongoing process to establish four financial institutions (AUFIs) — the African Central Bank (ACB), the African Investment Bank (AIB), the African Monetary Fund (AMF) and the Pan-African Stock Exchange (PASE), the process had not been as smooth as had been anticipated.

According to him, none of the AUFIs had reached the minimum number of ratifications required for the enabling legal instruments to enter into force and thereby facilitate their substantive establishment.

“Regrettably, the major challenges towards the establishment of the AUFIs include the slow rate of signature and ratification of the legal instruments and the limited capacity of member states to finance their establishment,” he said.

That, he explained, was detrimental to the operationalisation of the African Monetary Institute, which was the first step towards the establishment of the African Central Bank.

President Akufo-Addo, who is also the Chairman of the Authority of the Economic Community of West African States (ECOWAS), presented a number of recommendations to the AU Assembly for its adoption and endorsement, which, he said, “will be critical towards the establishment of the AUFIs”.

“They have been captured in the Draft Assembly Decision that will be submitted to Your Excellencies for consideration and adoption,” he informed the meeting.

On the matter of special drawing right (SDR) re-allocation within the context of optimising its impact on Africa, the President recounted that in Paris last May, world leaders had made a commitment to allocate the historic SDR 650 billion issuance to International Monetary Fund (IMF) member states, with Africa’s quota allocation of five per cent or SDR 33.3 billion.

“We value this commitment to additional resources, of which our continent is in dire need. It is unfortunate, however, that the only proposal that has been put on the table by the European countries so far is to re-channel these SDRs through only one institution, the IMF,” he said.

“The IMF should not be the sole beneficiary of such rechanneling. We believe that our own continental institutions, such as the African Development Bank (AfDB) and the Afreximbank, should be recipients of the recycling of these SDRs.

“Our finance ministers and the United Nations Economic Commission for Africa (UNECA) have advocated the use of regional development agencies to be included in this rechannelling,” he stressed.

President Akufo-Addo further told the assembly that African finance ministers, with UNECA, had consistently championed the allocation of SDRs to capitalise the AfDB and the AfreximBank, help establish an African stability mechanism and initiate a liquidity support facility (LSF).

“We need to guard against the continuing consequential stranglehold of the rating agencies, which has affected the cost of and access to capital markets for African countries and has, during this COVID-19 period, resulted in the downgrading of many African countries, exacerbating even more their funding challenges,” he said.

He, thus, stressed the need for the AU Assembly to urge G20 leaders to stick to their commitment to reallocate to Africa the SDR equivalent of $100 billion agreed to at the Paris Summit in May 2021.

As the Champion of AUFIs, President Akufo-Addo, at a workshop for AU Ministers of Finance and Central Bank Governors on November 3, 2021, stressed the need for support and expedited action on the setting up of the AUFIs.

He said aside from the benefits the AUFIs would give the union, the institutions “are also preconditions for the effective implementation of the African Continental Free Trade Area (AfCFTA) agreement and for achieving Agenda 2063: ‘The Africa We Want’”.