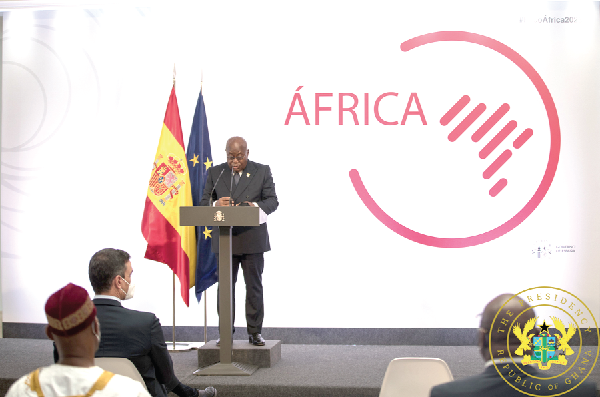 President Nana Addo Dankwa Akufo-Addo has called on the Spanish business community to consider Ghana as the investment destination of choice in West Africa.

He said the country had, over the years, carved a niche for itself as the most peaceful and investment-friendly nation in the sub-region.

“As most of you know, Ghana is a haven of peace, security and stability; indeed, the safest country in West Africa where legitimate investments are protected.

We have witnessed, through the ballot box, three peaceful transfers of power from one political party to another in the 28-year period of the Fourth Republic,” the President told the Spanish business community in Madrid yesterday as part of the “Focus Africa 2023” Conference in Madrid, Spain.

Spain’s presence in Africa in terms of business is minimal, compared to some other European countries.

It is for this reason that the Spanish Prime Minister, Pedro Sánchez, said his country wanted to “turn this decade into the decade of Spain in Africa”.

President Akufo-Addo said during his first term in office, 2017 to 2020, the government worked to correct the fundamentals of the economy which were all pointing in the wrong direction.

“We have, over the period, put in place measures needed to reduce the cost of doing business, improved the business environment and made the economy not only one of the most business-friendly in Africa but also one of the fastest-growing in the world,” he added.

According to the President, at a time the economies of most countries in the world were either in recession or recording negative growth, Ghana’s economy was one of the few that managed to record a positive GDP growth.

President Akufo-Addo added that in spite of the ravages of the COVID-19 pandemic, the government was working to grow the economy at a much faster rate this year, with a five per cent GDP growth rate target.

“This will enhance the prospects of a win-win environment for both the private and the public sectors; an environment where companies do not just survive but actually thrive,” he said.

President Akufo-Addo said the major programme that would drive the revival and revitalisation of the Ghanaian economy was the GH¢100 billion Ghana CARES ‘Obaatampa’ Programme, whose main elements include supporting commercial farming and attracting educated youth into commercial farming, building the country’s light manufacturing sector, developing engineering tools and an ICT-digital economy, among other initiatives.

The President further encouraged the Spanish business community to invest in the government’s flagship programmes such as One-district, One-factory, One-village, One-dam, Planting for Food and Jobs, as well as in the water, health, housing, road and rail infrastructure, petroleum and gas, among others.

He added that the country took great interest in public-private partnerships in its development effort.

On the African Continental Free Trade Area (AfCFTA) agreement, the President said a new strategic partnership among Africa, Spain and Europe should manifest in strong support for the AfCFTA, which began trading on January 1, this year.

“It is the world’s largest free trade area outside of the World Trade Organisation (WTO) itself. By 2050, it will cover an estimated 2.5 billion people and have over a quarter of the world’s working age population,” he added.

President Akufo-Addo said African leaders were committed to charting a new path of trade and investment co-operation with the rest of the world.

Touching on the COVID-19, the President said there was the need for global co-operation to deal with the pandemic.

“We need to co-operate more, and we need to co-operate smartly. In the midst of all the complexities of the 21st century, our interdependence requires such co-operation. So I applaud Prime Minister Pedro Sánchez for convening “Focus Africa 2023” and for the brilliance of the Plan Africa III initiative,” he added.

In spite of the havoc caused by COVID-19, he said, the government was pursuing accelerated economic development through improved macroeconomic management, domestic revenue mobilisation emanating from reforms in public revenue policy and administration, the creation of a conducive environment for businesses to flourish, tackling corruption and curbing excessive bureaucratic procedures.