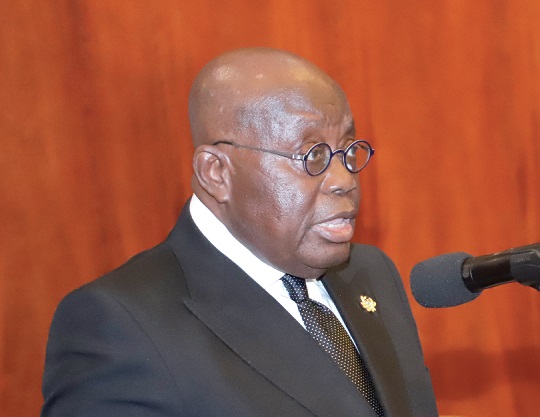 President Nana Addo Dankwa Akufo-Addo is scheduled to deliver a message on the State of the Nation (SONA) to Parliament on Wednesday, March 30, 2022.

This is in accordance with article 67 of the 1992 constitution that says the President should give the State of the Nation Address at the beginning and close of every Parliamentary Session.

The State of the Nation Address is an annual address to Parliament given by the President of the Republic covering economic, social and financial state of the country.

The Majority Chief Whip, Mr Frank Annoh-Dompreh announced this when he presented the Business Statement of the House for the Tenth Week ending Saturday, April 2, 2022 on Friday.

“Pursuant to the convention of this House, Honorable Members are urged to be punctual and accordingly be seated in the chamber latest by 9.15am, as it may not be courteous for members to enter or exit the House after the President has taken his seat in the chamber to deliver his address”, Mr Annoh-Dompreh said.

Debate on the SONA

He stated that a motion to thank the President for the Message of the State of the Nation would be moved on Thursday, March 31, 2022 and time would be allotted to members to make contributions, eight from each side of the House.

He said the two leaders together with two members one from each side of the House would conclude the debate on the SONA on Saturday, April 2, 2022.

Sitting on Saturday and Monday

Mr Annoh-Dompreh said with regards to the exigencies of the time, the House would sit on Saturday, April 2, 2022 and on Monday, April 4, 2022.

He added that sittings of the House might also be extended to ensure that business scheduled for the week under consideration was completed.