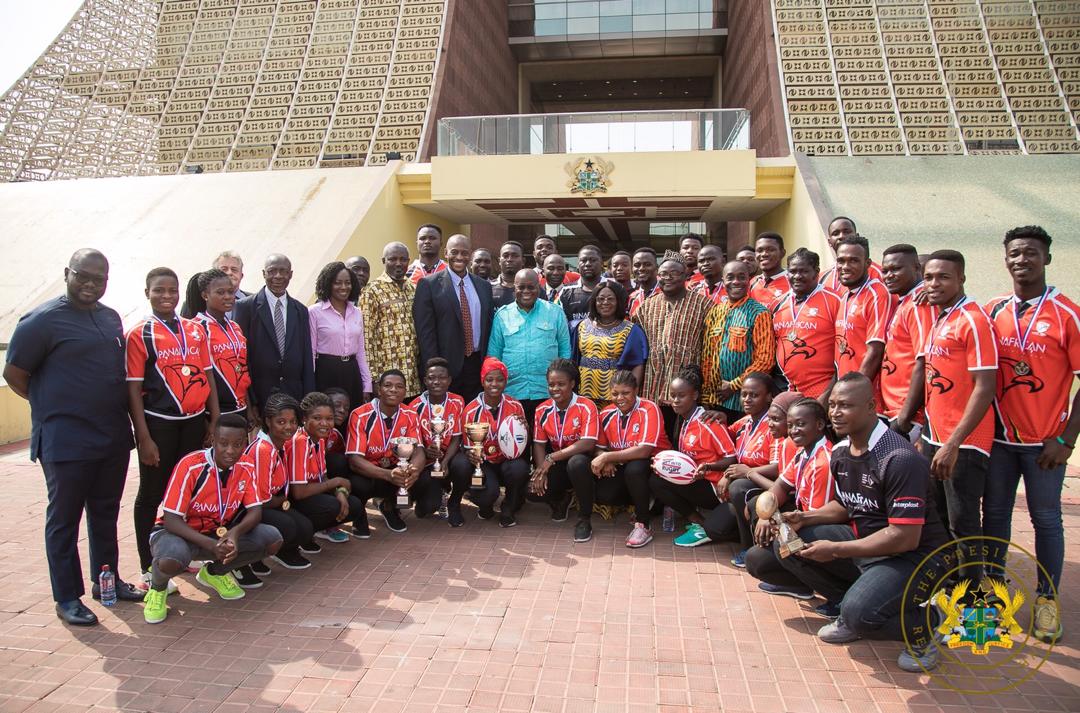 His Excellency President Nana Addo Dankwa Akufo-Addo opened the gates of Jubilee House to a delegation of Ghana Rugby, led by the newly elected President and Board Chairman, Mr Herbert Mensah.

The honour was bestowed on Ghana Rugby by the President of Ghana due to the fact that Ghana Rugby has flown Ghana’s flag high by winning four continental trophies for Ghana since 2017.

In his opening remarks, Mensah praised His Excellency Nana Akufo-Addo as the President of Ghana who not only knows and understands sport better than his predecessors but who is also a great champion for the cause of sport in Ghana.

Mensah also appealed for the Presidency’s intervention in getting rugby officially approved as an optional sport in government schools, and to assist with allowing Ghana Rugby access to national stadia and facilities for their preparations towards flying Ghana’s flag high on the continent.

President Nana Akufu-Addo congratulated the national squads of Ghana Rugby, the Ghana Eagles, for their achievements and urged them to continue to perform exceptionally in the best interest of Ghana.

BestNewsGH.com reports President Akufo-Addo as also acknowledging the huge investments made by Mr. Herbert Mensah and his administration towards the development of rugby as a sport in Ghana and for flying the Ghana flag high. He also appropriated an amount of US$ 100,000 to Ghana Rugby to assist with preparations towards their 2020 international encounters.

Ghana Rugby will be competing in the 2020 Rugby Africa Cup Pool stages when it will face Zimbabwe on 20 June 2020 in Zimbabwe and Tunisia on 4 July 2020 in Ghana.