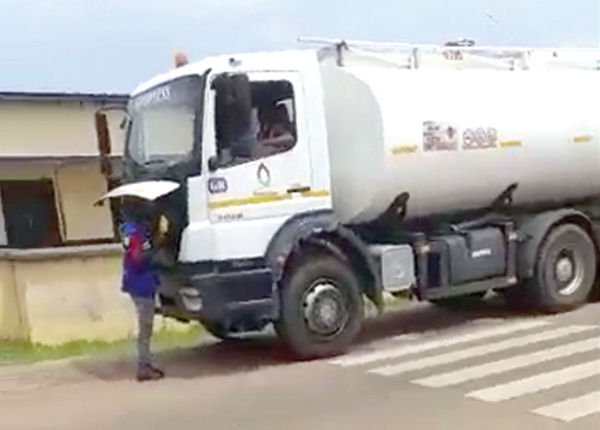 The Keta Police Command is holding a worker of the Keta Municipal Assembly, Geoffrey James Ocloo, and a tanker driver over their involvement in the diversion of a tanker carrying premix fuel meant for fishermen in the Keta municipality.

The product was meant for the Nukpesekope Landing Beach Committee (LBC) but was allegedly diverted and offloaded onto another truck at Afife, about 30 kilometres from Keta.

In recent months, fishermen in Keta and its adjoining fishing communities have been complaining about the lack of premix fuel for their fishing business and had suspected diversion of the product.

A member of the Keta Vigilante Group told the Daily Graphic that the tanker, with registration number GT 2254 Z, brought the product to Nukpesekope but did not discharge the fuel as intended.

After waiting for a few minutes, the vehicle set off through Afiadenyigba to Afife road where it was seen offloading the premix fuel onto another truck.

He said a report was made to the Keta Police Command at Afife in the Ketu North Municipal Assembly in the Volta Region.

According to the source, a thorough check by the police showed that the waybill had allegedly been doctored by the Secretary of the Nukpesekope LBC, Mr Ocloo, to indicate that it was meant for a different designation.

Currently, he said, the truck loaded with the alleged diverted premix fuel had been taken back to the Keta Police Command for investigation and possible arrest of those who were behind “this black market dealings in premix fuel in the Keta Municipal Assembly”.

When contacted, the Keta Municipal Chief Executive ( MCE), Emmanuel Gemega, who expressed shock at the turn of events, said he received the news of the alleged diversion and arrest of two others from the Commander of the Keta Police Division, Chief Supt. Leonard Abaka, when he was in Accra on an official duty last Tuesday.

Mr Gemega, who is also the Chairman of Municipal Security Council, told the Daily Graphic that he had asked the Commander to proceed with the necessary investigations and prosecution.