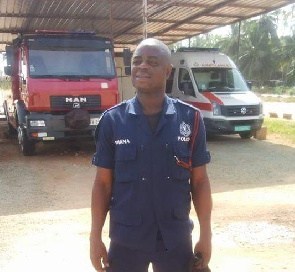 A cop on duty on the Osagyefo Power Barge and under investigation for theft has shot himself dead.

Sgt Fuseini Mohamuda with badge no. 37400G “shot himself dead with an AK47” after he sent, CPL Iddrisu Kafando Muntari with badge no. 551484L, whom he was on duty with to buy him a shaving blade on Saturday 24 March.

A Police Situational Report said Sgt Mohamudu left a note denying the theft accusation. The short note read: “I cannot take this disgrace [on] something I don’t know.”
Sgt Mohamudu, the STRIP said was found “lying in a supine position in a pool of blood dead with the rifle by his legs.” His remain has been transported to Police Hospital Morgue in Accra for preservation and autopsy.

Sgt Mohamuda was on duty on the Osagyefo Power Barge enclave at Effasu, near Half Assini in the Western Region. He was under investigation in a case of theft with a colleague and four other civilian accomplices.

Police upon intelligence intercepted a Benz Cargo truck with registration number NR 991 P which was allegedly used for the operation, with the four occupants on board.