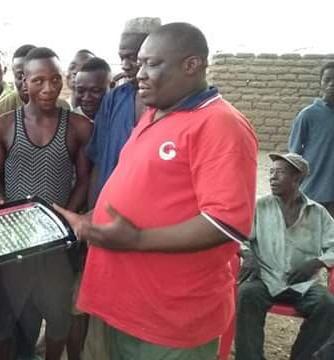 Police in the Upper West Region having cinfirmed the shooting to death of the opposition National Democratic Congress (NDC) Chairman for the Daffiama-Bussie-Issa constituency, Puoplabong Richard has outlined details of how he was killed.

According to the police, the deceased was among four other occupants of a Mercedez Benz salon car with registration number GW 3366 Y, being driven by one Desmond Atingani from Kojokperi to Wa, the Upper West Regional Capital.

In the course of the journey according to the police, they discovered some looters numbering about four who blocked them, demanding that they stop, a directive they refused to adhere to, culminating in the hoodlums opening fire on them.

They explained that the deceased who occupied the from seat and was close to the driver was killed instantly after the bullets hit him.

The driver according to the police also sustained injuries which were not life threatening.

Meanwhile the NDC in the Region is suspecting foul play in the death of the chairman.

An executive of the NDC in the region, one Osman Seidu suspects that Mr. Puoplabomg was eliminated because he posed a threat to the ruling New Patriotic Party (NPP) because the NPP Regional Chairman also comes from the same constituency.