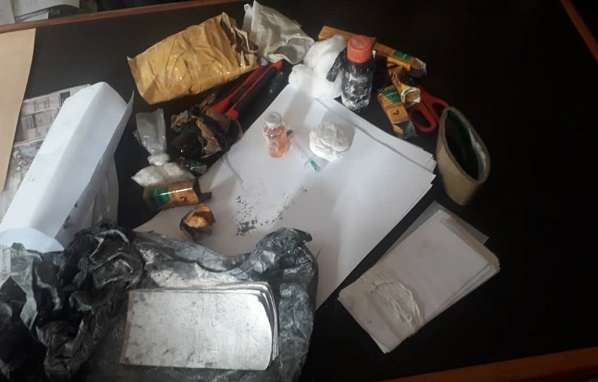 The police have arrested two persons suspected to be involved in the production of fake currency notes in Accra.

The two suspects have been identified as Kamara Seidu, a Liberian, and Judith Koadue, a Camerounian, both aged 40.

They were in possession of counterfeit GH¢50 notes and pieces of paper cut to the size of the GH¢50 note.

Briefing the Daily Graphic yesterday, the Public Relations Officer (PRO) of the Accra Regional Police Command, Deputy Superintendent of Police (DSP) Mrs Effia Tenge, said at about 2 p.m. last Wednesday, the Baatsona Divisional Police, acting on a tip-off, arrested the two suspects at a hotel along the Baatsona-Spintex Road.

The two, she said, were lodging in a room in the hotel and the police team that made the arrest retrieved various pieces of equipment used by the duo to make the counterfeit notes.

The items included two bottles of a liquid substance, a white polythene bag containing some washing powder, cotton wool and gloves all suspected to be items used in processing the fake currency notes.

DSP Tenge said the police also discovered nine pieces of GH¢50 notes which were later found to be fake.

Later when the police took the suspects to their residence at Nii Boi Town in Accra for a search, a pair of scissors, a cutter, 88 pieces of paper, cut into sizes of GH¢50, two bottles containing a liquid substance, two rolls of Sellotape, two bundles of white polythene bags and 60 sheets of paper all suspected to be materials for processing fake currencies, were found.

She said preliminary investigation had revealed that the suspects were fraudsters who swindled their victims under the pretext of doubling their money.

They take the genuine cash from the victims and give them the counterfeit currency as the money that has been doubled.