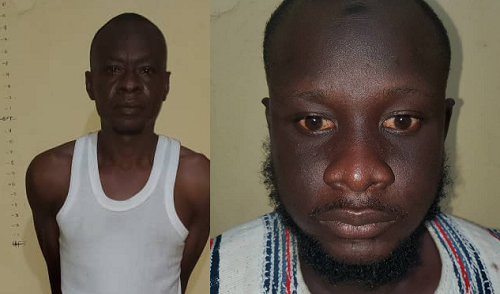 A Police patrol team in conjunction with a Community Watchdog has arrested two member of an armed robbery gang who robbed a gold dealer of his gold detecting machine at Talekura near Tinga, a gold mining enclave in the Bole District of the Savannah Region.

The suspects, Dauda Appiah, 43 and Yussif Abdullah, 25, were later spotted with the machine at Maluwe also in the Bole district and were subsequently arrested a day after the robbery on August 30, 2021.

The suspects together with two others who are on the run, according to the police, were in masks and armed with gun and cutlass robbed the gold dealer of his gold detecting machine on Sunday, August 29,2021 at about 10 an at Talewura.

A search conducted in the suspects’ room revealed an empty shell of G3 ammunition, a barrel of single barrel gun and cutlass.

The Public Relations Officer (PRO) of the Savannah Regional Command, Inspector Owusu Adjekum who briefed the media said on August 30,2021 at 3.30 on one Kuualong Dominic togethet with Mahama Sumani Sofo , a member of the community watch around Tinga and Wakawaka assisted by the day Bole Police Patrol team arrested and brought the two suspects, Dauda and Yusif to the Bole police station that on August 29,2021 at about 10 am at Talekura the suspects together with two others who are at large were mask and armed with gun and cutlass robbed Kuualong of his gold detecting machine.

He said on August 30, 2021 at about 1pm the suspects were spotted with the machine at Maluwe and they were arrested.

Inspector Adjekum said a search conducted in the suspects room revealed an empty shell of G3 ammunition, a barrel single gun and cutlass were retrieved from the suspects.

He said the exhibits have been retained for evidential purposes.

He said the two suspects were currently in police custody assisting in further investigations.