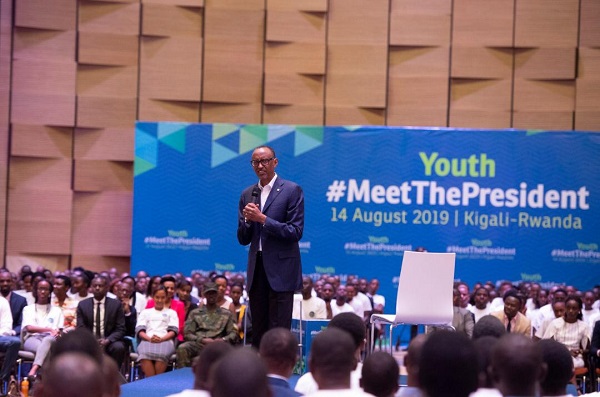 President of Rwanda, Paul Kagame has met over 3000 young Rwandans as part of his “Meet the President” series.

Wednesday’s meeting took place at the Rusororo based Intare Conference Arena and was also broadcast to those not able to be at the Arena.

The gathering was aimed at providing the opportunity for Kagamae to engage with the young generation on the national aspirations for the next 25 years.

Inspired by the country’s Vision 2050, Kagame encouraged the youth to be self-driven to consolidate the gains the country has made over the last couple of years.

He said “There is no better place, there are no better people to have this conversation with, than here and with you. It is your choice to refuse to be stepped on and say ‘I am my own self’.”

Paul Kagame has constantly come under attack from the West for human rights abuses and restricting political opposition.

Refuse to be dictated to

He however told the youth to always refuse to be dictated on what to do as Rwandans.

Kagame asked them to stand up for their rights and choose to do what they want to do and claim their spot in the world.

“As we work for development, as we work for our country to be secure, to be stable, to be free, to be really the best that we want to be and we are capable of being, you can’t wait for somebody else to come and do some of these things for you,” Kagame said.

When I say you, I mean me as well, so we…You must understand the world we live in, it is not very kind, it is very harsh. There is no one out there, who is thinking on your behalf about how to solve your challenges.”

Kagame also spoke about what he calls the western propaganda, asking the youth to partake in the fight against western stereotype on Africa.

“That is why I really want us to be together in this fight, because it is a fight for who we are and who we want to be. It is a fight about ourselves, about Rwandans, about Africans,” he said.

Kagame adds “We have been downtrodden largely because of ourselves. Because we have not addressed some of the things that people build on to look down upon us.”

He added; “We are still far from where we want to be but surely we don’t want to be where other people want us to be”.

“If we don’t develop the mind-set that all these things we are trying to achieve are good for us, that we are not doing this because we want to impress anybody, then everything else we discussed, impressive as it was, will be wasted.”