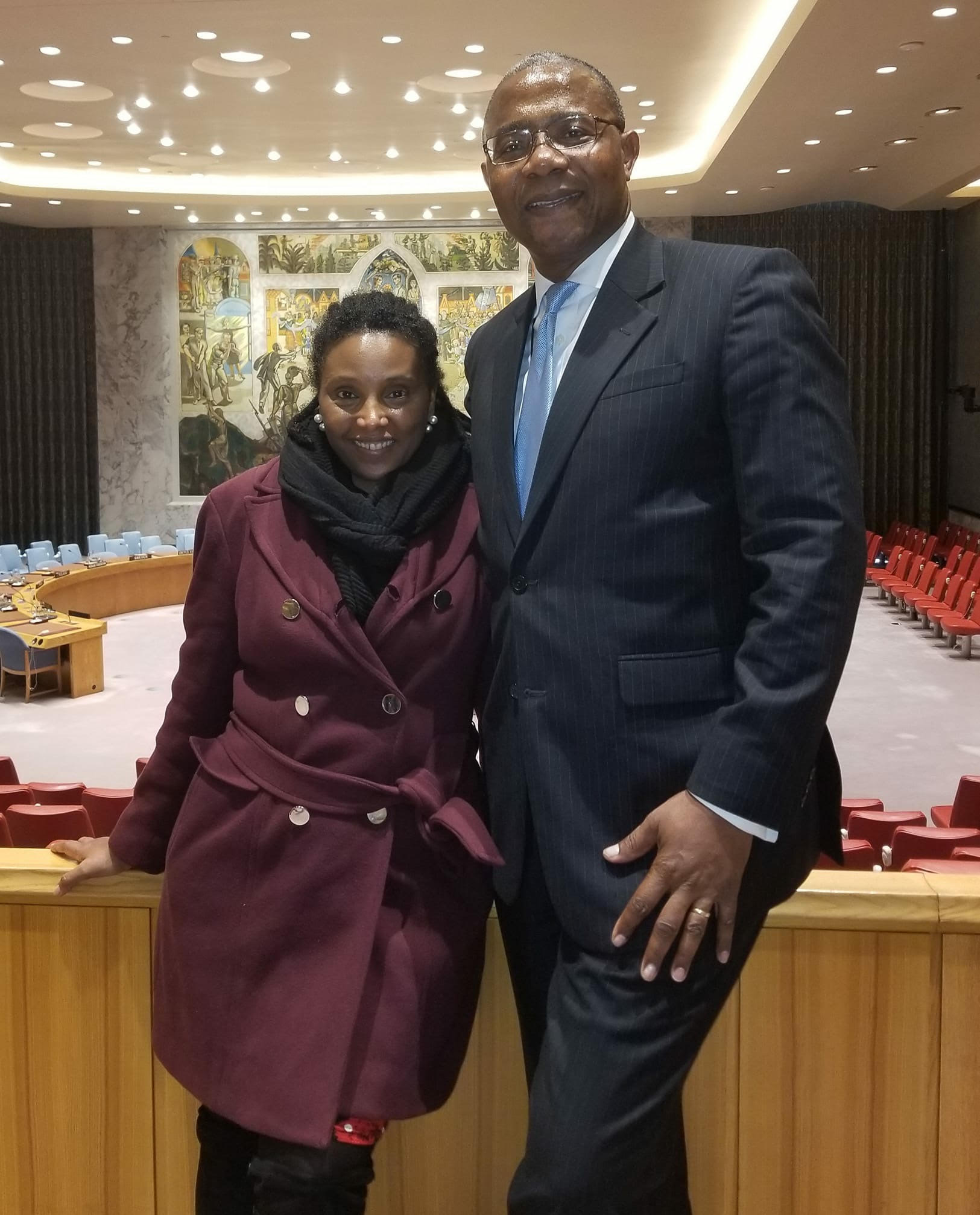 Former BBC anchor and former Director of Communications at the Ghana’s Presidency in the erstwhile John Dramani Mahama administration, Ben Dotsei Malor has penned down his life experience from his days with the BBC, to when he moved to the United Nations.

He has titled it ‘Rejection and Promotion-Lessons from my move from the BBC to the UN.

‘’Be on good terms with your colleagues, even the ones who choose to be your enemy.’’ he advised.

We re-produce his unedited script below, for your reading pleasure.

REJECTION AND PROMOTION – LESSONS FROM MY MOVE FROM THE BBC TO THE UN:  Yesterday at UN Headquarters, I received, welcomed, and thanked a wonderful sister, Kadaria Ahmed, because she was used by God to push me from the BBC in London to the United Nations in New York.  Seeing her at the UN was another amazing teachable moment – a moment to consider the mysterious ways of God, and a moment that reinforces the truth that nobody rises up or achieves anything in life all on their own – without the hand of God through the actions of fellow human beings.  I also felt that times of rejection – or seeming rejection – CAN serve as a good soil for new seeds of hope and success to be planted in our lives.

The full story – with its twists, turns, and tensions, will take pages, so please allow me to give you just the abridged version in this post.

Working for the United Nations was never something I had in mind.  I admire those who get an early revelation and vision of working for this major global body.  I was quite comfortable learning, striving, and improving in the BBC in London, but became a reluctant, accidental, or Divinely-guided international civil servant in the United Nations in January 2003.  Two years earlier in 2001, something significant had happened that rattled my world, shook my self-confidence, and made me wonder about my prospects and future with the BBC.  I was doing well enough by this time and had become one of the regular (possibly popular) voices on the BBC to Africa.  I was given opportunities to host or present a variety of programmes from Postmark Africa, Education Express, Arts and Africa, through the Sports show, Fast Track, to the popular early morning news magazine show, Network Africa.  I was also called upon at times to present the beautiful global programme, “Outlook,” when Fred Dove and Heather Paten, the regular presenters, were not around.

I worked hard.  I enjoyed working hard.  I put in extra, and was ready to step in whenever a colleague was indisposed, sick, or travelling.  I got on well with my colleagues – well, almost all.  I simply believed in a work ethic drummed into me by my mum and family.  I also found merit in getting along with those you work with.  I learned and borrowed successful interviewing and broadcasting techniques from my peers and other seniors like Hilton Fyle, Robin White, and Neil Curry.  There were other broadcasters in the wider BBC whom I considered distant and silent mentors, so I learned/copied from their effectiveness on air.

From never doing any broadcasting in Ghana, I had worked hard – under God’s grace – to become a Senior Producer at the BBC.  Thank GOD.  Now, an opening comes up for a possible promotion to Deputy Editor.  But when I applied and went for the interview, I was not successful.  OK, I failed!  Others had done better, according to the panel. I felt like a reject.  My world looked bleak.

Strangely, the bosses or recruiting panel decided – in a sort of Solomonic decision-making manner – to get the top three qualifiers or successful applicants to try the job for two months each, until the post was declared fully vacant six months later.  I was among the bottom three – the three “rejects”.  I was in personal turmoil.  In my quiet moments, I asked myself, “So I’m not even good enough to be among the top three senior producers in our team?”  I felt downcast, but carried on with work as best as I could.  My faith in GOD proved to be the most valuable asset in my life in this period.  This was a time of doubts and anxieties, and a time of deep reflection that tested the soul.

It was during this time, with my feelings of inadequacy, insecurity, and rejection hanging over me, that the wonderful woman you see in this video and photo below, was used by God to steer me towards the UN.  Kadaria and I were working at the BBC, and we found ourselves on one of the night shifts in Bush House one week.  The shift started usually from 10 pm through the night, with the first editions of Network Africa the next day at 0330 GMT, then 4.30, 5.30, 6.30 and then 7.30.  In my state of rejection, Kadaria, knowing I did not get a good report from the promotion process, approached me to offer some encouragement.  She added that there was an opening at the UN in New York, that she would have applied for, but she wanted me to give it a try.  She was generous and kind but I wasn’t moved. “If bosses who have trained me, encouraged me, and seen my improvement and other qualities do not ‘value’ me in the BBC then how would others beyond the BBC wish to recruit me,” I argued in my head.

I was so jaded and in such a state of discouragement that I didn’t act on Kadaria’s information and encouragement.  Days went by and I did nothing.  Then, I think, she literally came to my computer and showed me where the job was and urged me again to, “JUST TRY”.   Reluctantly, on a Friday mid-morning after our last shift ended for the week, and with the deadline for the UN job just hours away, I dragged myself to the home of my brother Joel Kibazo, whose wonderful lawyer wife, Jaye, also stood above my shoulders – almost holding Kadaria’s “gun” to my head 😉 – to fill and submit this online application.  The cloud of rejection still remained with me, so I prayed more and sought ways to strengthen my faith.

The songwriter Bill Withers says in LEAN ON ME:

Sometimes in our lives

We all have pain

We all have sorrow

But if we are wise

We know that there’s

When you’re not strong

And I’ll be your friend

I’ll help you carry on

For it won’t be long

Somebody to lean on

Kadaria’s single act of generosity and encouragement, started me on a course that led me to join the UN in January 2003.  Yes, there were interviews, checks, and a long wait but my UN journey started from Kadaria’s intial step.  In the intervening period, from the rejection to my move to the UN, a bigger miracle happened, and I got THE promotion I had craved earlier and became Deputy Editor.  (That would take too long to narrate now – leave it for another post, please.)   The UN process had already kicked in … and I was eventually recruited to move to New York.

… Your enemies are not God – as they say in Ghana.  (My bosses were not enemies – though it felt that way when I wasn’t promoted.) Those who may not like or accept you today can still turn around tomorrow to promote you or hail you.  You don’t give up on your dream, or your success and prosperity at the first point of failure.  The same BBC bosses who “rejected” me six months earlier promoted me, soon after, when I tried again.

My BBC editor and mentor, Neil Curry, has taught me an important lesson in broadcasting, communication, and leadership:  mistakes are not the worst things that can happen, it is HOW YOU RESPOND to the mistakes that matters.

Your success, happiness, or well-being depends on how you handle or respond – not react – to the challenges that come your way.  REACTING implies a sudden, negative, impulsive, and purely emotional behavior that will do more harm than good.  RESPONDING, usually implies taking control of our emotions, staying calm and thoughtful, and taking a key step or steps to address a bad situation in the most constructive and helpful way possible.

Thank you, Kadaria.  God bless you.

… And, there, but for the Grace of God, goes Ben Dotsei Malor. Thank you.